A SCOTS mum is campaigning to change a law that “penalises” women who feed their babies formula milk.

The law is meant to promote the health benefits of breastfeeding but Elizabeth Luckman, a mother-of-two from Peebles in the Scottish Borders, claims it discriminates against many women.

She struggled to breastfeed after her twins were born five weeks prematurely in the summer and turned to formula.

Elizabeth, 33, realised that stores including Boots and Tesco refused to award points to parents who use formula milk for babies up to six month.

The law, which applies north and south of the border, also bans buy-one-get-one-free deals.

The benefits of breastfeeding have constantly been championed due to their health benefits for both mother and child.

But formula caters for those who struggle with breastfeeding, have medical issues making it difficult or just their own personal choice – proving another costly family expense.

Elizabeth launched her petition, “Allow the collection of store points when purchasing stage one infant formula”, on the UK Government and Parliament website last month and has attracted more than 300 signatures so far.

Speaking today, Elizabeth, said: “I’m all for promoting breastfeeding and my small experience of trying to express gave me total admiration for mothers who can and choose to breastfeed.

“However I feel that for families who choose or have to bottle feed not being able to collect store points for stage one infant formula is discriminatory towards them, as opposed to being supportive of breast feeding families. 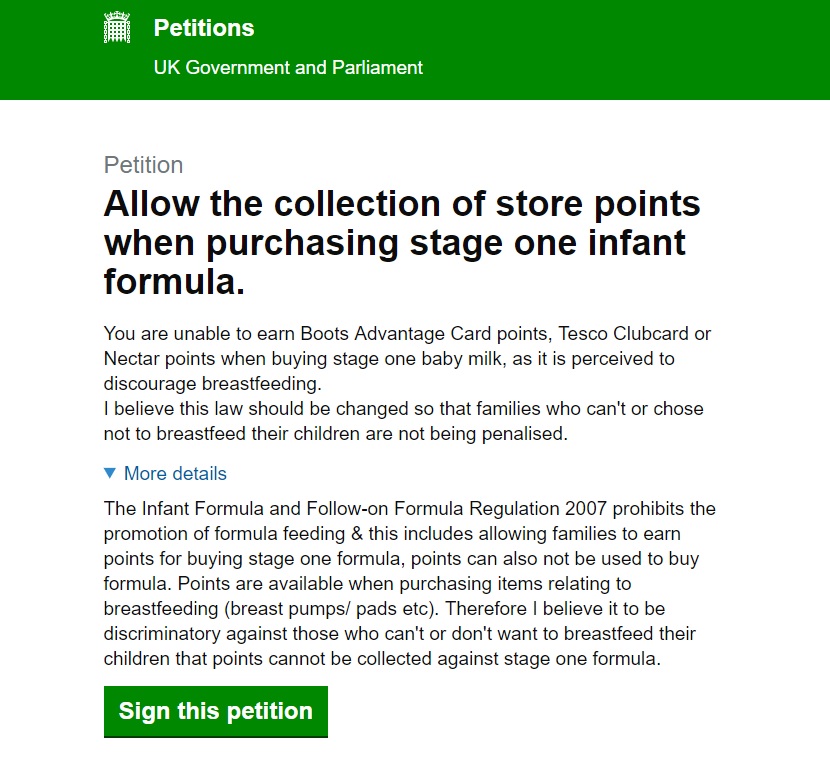 “I expressed milk initially but by the time we were able to try them on breastfeeding they were so tired and I felt having going through all they had, it was easier to let them stick to formula which they had gotten used to.

“Before I had the boys I was very keen to try breastfeeding but because they were in special care it wasn’t as easy for us. Me and my husband discussed expressing but the right thing for us was choosing to formula feed.”

She added: “I saw a sign in Boots one day that said they don’t reward points for stage one formula milk which I thought was interesting so I started the petition as I wanted to raise awareness of this discrimination against families who bottle feed their babies.”

The current UK laws are that although follow-on formula milk can be promoted, manufacturers and sellers are banned from advertising “first infant formula”.

It would bring into UK law WHO provisions on the marketing of infant formula which have been in place since 1981.

Elizabeth’s petition has received a mixed reaction from mothers on social media.

One said: “I disagree, sorry! There has been a lot of work behind those policies for a reason – a worldwide health issue reason. Formula does not need more support.”

Another mother wrote: “I agree with the sentiment and have signed and shared. I support breastfeeding and tried and tried, but couldn’t do it.

“I am fed up of being branded a failure and judged by other mothers who breastfeed.

“Breast feeding is a choice, just like choosing to have a baby or not, choosing a birth plan. It is not for others to judge our decisions.”

Elizabeth’s petition can be found at https://petition.parliament.uk/petitions/202587

A Scottish Government spokeswoman today said they have no plans to “change” or “weaken” the current law.

She said: “The Infant Formula and Follow-on Formula (Scotland) Regulation 2007 is based on a EU directive which prohibits the promotion of the formula.

“Introducing any points system or promotional incentive would go against this directive and could substantially change or weaken it. The Scottish Government has therefore no plans to make any such changes.

“We remain committed to supporting breastfeeding as it has many short and longer term health benefits for both mother and baby.

“However, the decision on how to feed their baby remains a choice entirely for new mums to make.”