A TAKEAWAY customer has gone viral after sharing creepy messages she received from a Just Eat delivery driver.

After ordering takeaway food, Michelle Midwinter was later contacted by the driver who described himself as “a fan.”

The man then asked if she had a boyfriend and signed off “Good night baby”.

But she was left disgusted when told by the firm that they “dont really have a complaints department” and was offered £5 for the “inconvenience.”

The jewellery maker said: “Just a snippet of Just Eat’s response to my receiving unsolicited messages from the guy who had just delivered my food. Nice one Just Eat.

“Apart from him using my number in this way surely being in breach of privacy laws etc, they don’t really seem to take it seriously do they?”

A screenshot of the messages shows that Michelle was sent one saying “Hey”, to which she replied “Who is this?”

Her admirer then announces himself as “a fan” and sends a winky face emoji.

He then reveals “I’m the guy who delivered your meal” and enquires “You enjoy your meal?”

The messages get creepier including one saying: “If you have a boyfriend tell me I don’t want to make any problems.”

He then signs off by saying: “Good night baby see you next time when I get your meal.”

He gets a blunt reply from Michelle who sharply says: “I’m literally never ordering from there ever again.” 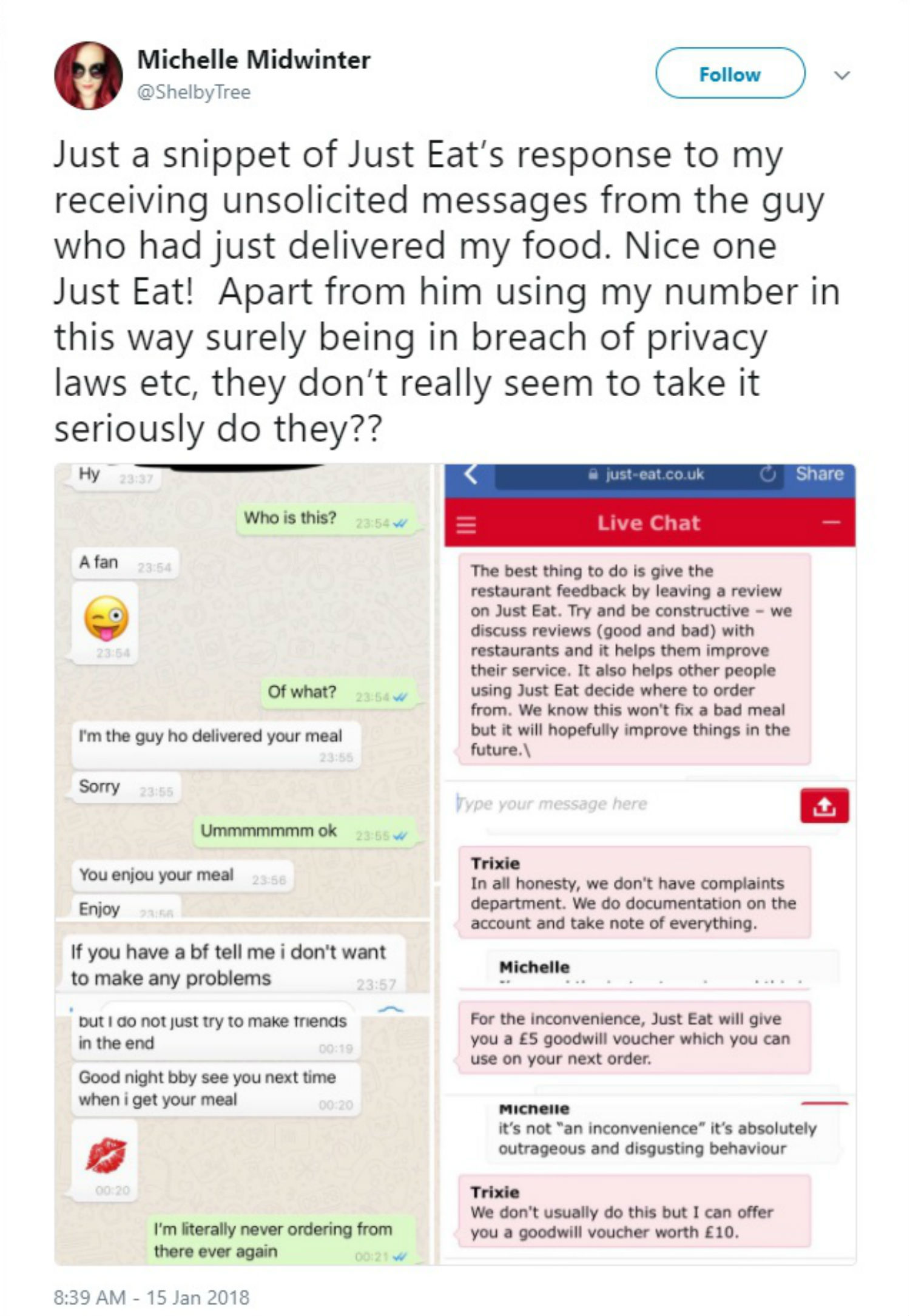 She then turned to the delivery service’s online help hoping for some understanding of her situation.

However she was left disappointed when a helper named Trixie told her : “In all honesty we don’t have a complaints department. We do documentation on the account and take note of everything.”

Michelle’s reply is hidden in the screenshot, but Trixie then says: “For the inconvenience, Just Eat will give you a £5 goodwill voucher which you can use on your next order.”

Shocked at the apparent lightness with which her situation was being treated, she replied: “It’s not an ‘inconvenience’ it’s absolutely outrageous and disgusting behaviour.”

That doesn’t seem to trigger much of a reaction from Trixie who then just offers to up the goodwill voucher to £10, adding that “we don’t usually do this.”

Social media users were appalled at Michelle’s treatment and commented on her post.

Peter Day said: “Jesus, this is actually vile and makes me feel sick to my stomach. I’m so sorry that this happened to you Michelle, Truly. You should absolutely get in touch with an Ombudsman because this isn’t the correct handling of a complaint at all.”

Lewis Bell said: “‘Here have a voucher so you don’t complain about sexual harassment’ is not a good brand.”

Another said: “We have it in writing, folks – @JustEatUK values the safety, privacy, and data of women at £10. An outstandingly dim-witted, and dangerous, response to a serious issue.”

Some other women said that they had experienced similar things, with one saying: “Same thing happened to me and they just said to me ‘what would you like us to do?’ It’s ridiculous.

“Didn’t even get a £10 voucher, they offered me nothing. It wasn’t even my delivery driver who’d sent the messages, he passed my number onto another driver at the restaurant.”

Michelle later added: “That escalated quickly. I am astounded by the amount of females who have contacted me saying a similar thing happened to them. This is no longer about my personal experience, this is about privacy law and safeguarding females. This is clearly a huge problem and it needs to stop.”

They said: “Hey Michelle, we’re really sorry to see this and we’d really like to get this looked into and raised with the restaurant and our Customer Care. If you could send the details over to [email protected] we’ll take it from there.”

The firm later said in a statement: “We were deeply concerned to hear about this incident. Whilst the restaurants on our platform are independent from the Just Eat business, we hold ourselves to high standards and in line with these, we would expect all drivers associated with our restaurant partners to act responsibly and respectfully at all times.

“This driver has acted in a way that does not represent Just Eat and our core values. We are investigating this with our restaurant partner and are also speaking to this customer offline and if the customer decides this is a criminal matter and reports it to the police, we will of course assist the police with any investigation.”

The firm added that it takes the “safeguarding of customer data extremely seriously”.

They added that they were “appalled” by the initial handling of the complaint.

“We are looking at our procedures to understand why incorrect and inappropriate information was given out to the customer on this occasion.

We have highlighted this with our Customer Care Senior Management team, who will review the incident, and ensure appropriate action is taken to ensure this doesn’t happen again.”

Speaking today, Michelle, 33, from Gloucestershire said: “The scary thing is the sheer number of females who have had similar experiences – a few with Just Eat, but generally this issue is much bigger and more widespread than I initially anticipated. We trust companies with our personal details and for them to be used in this way is unacceptable.

“Countless females have reached out and shared their stories which are much more traumatising than mine. I now realise we have to consider the bigger picture. This is no longer about my personal experience, this is about every single female who has been victimised in this way by someone from a company we put our trust in.”