PARENTS have accused the makers of a hugely popular cartoon for kids of sexism because the merchandising lacks female characters.

But hundreds of parents have complained that that many of the award-winning show’s toys and clothes leave out Skye.

And parents of boys claim that even when they do find Skye-related merchandise it is usually in pink and aimed at girls.

The hashtag “Where is Skye?” has even begun circulating on Twitter. 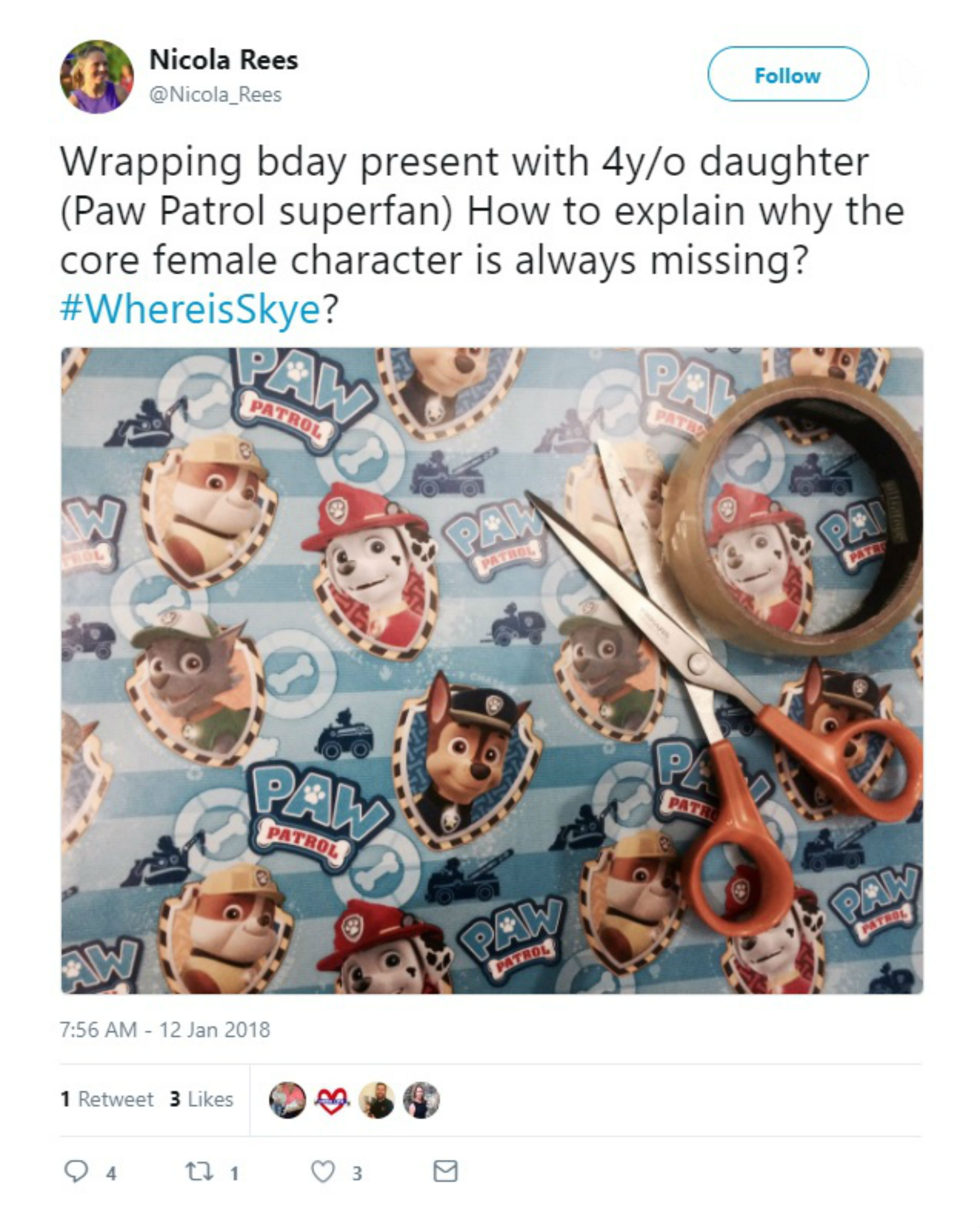 Facebook group, Let Toys be Toys – For Boys and Girls, which challenges gender stereotypes, have been inundated with hundreds of messages about the issue.

“This happens all the time with Skye, one of the original line-up.

“The implied suggestion that boys can’t/won’t/shouldn’t wear a T-shirt or carry a lunch box or wrap a present in paper with Skye on it sends a harmful message to boys that admiring a female character would somehow make them less of a boy.

“It also sends a negative message to girls that their presence is less valued and thus female characters are dispensable.

Parents weighed in, saying their male children are constantly left upset by the lack of Skye. 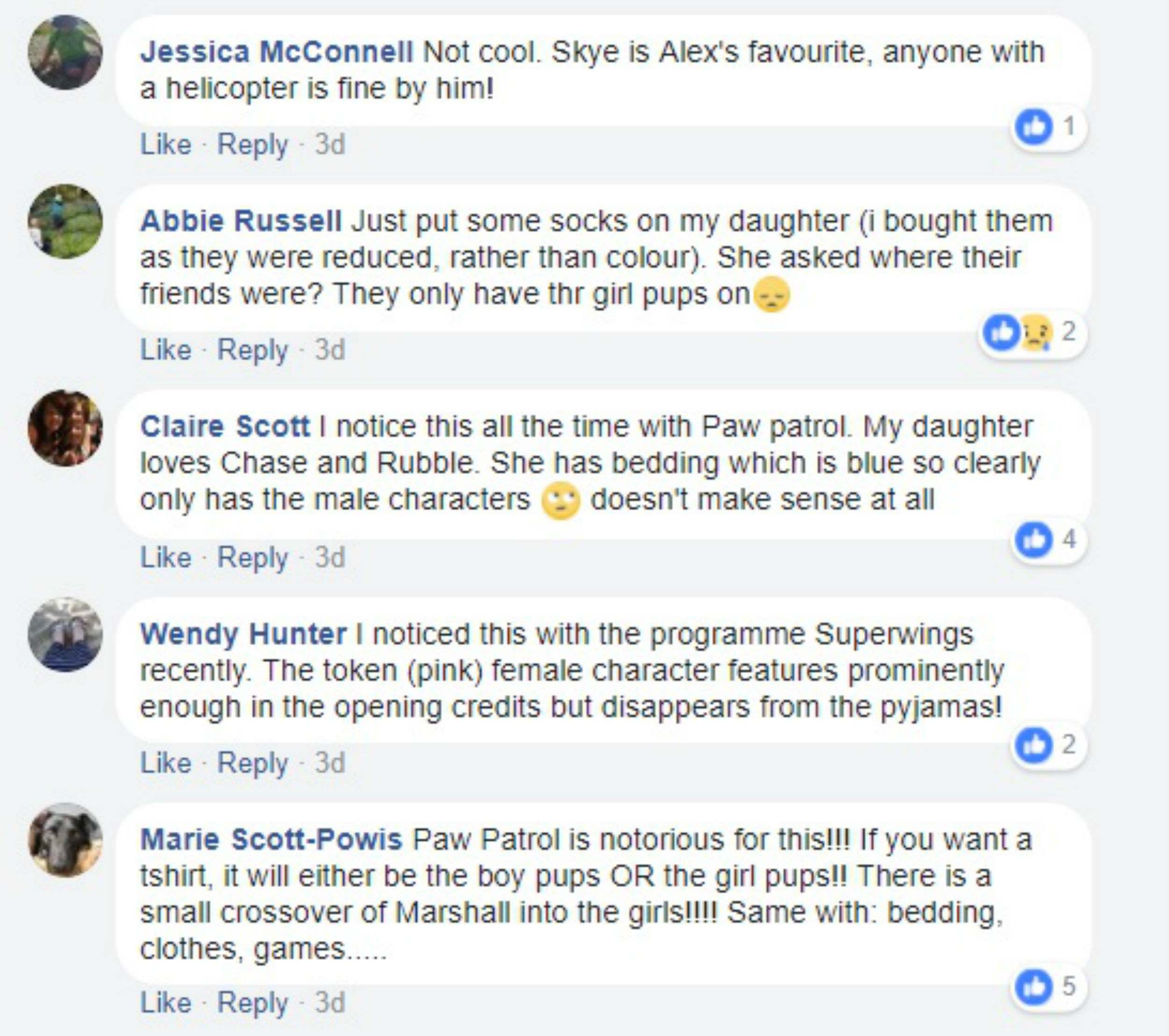 Marie Scott-Powis said: “Paw Patrol is notorious for this. If you want a T-shirt, it will either be the boy pups OR the girl pups.

“Leah Goodwin wrote: “My son had this when we bought some vests. ‘Where’s Skye…Mummy?

“I told him the truth. ‘The people that make them don’t think you should wear something with girls on because you’re a boy and shouldn’t like them.”

Referring to another, recently-introduced female character, Ruby Sturman said: “My little boy’s favourite from Paw Patrol is Everest. Almost impossible to get anything with her on that isn’t pink and flowery, as well as her being missing from items in ‘boys’ section.”

And Natasha Mead wrote: “We noticed this with Paw Patrol a while back when we bought my son a onesie that didn’t include Skye or Everest. They work as a team, so why not include them all?”

Supermarkets such as Asda, Sainsbury’s and Tesco all sell Paw Patrol merchandise including official childrens clothing. 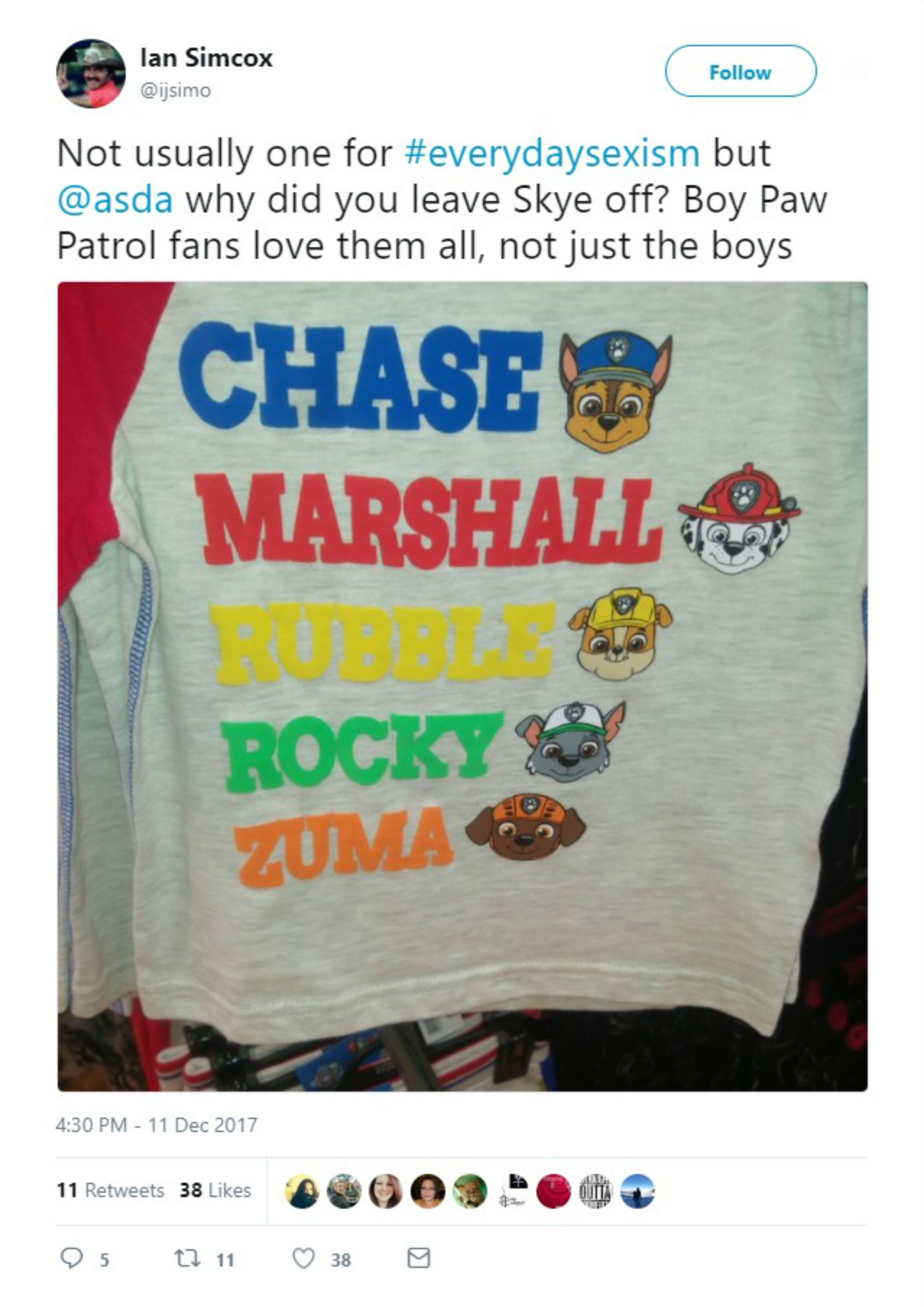 Paw Patrol focusses on a boy named Ryder who leads a pack of search and rescue dogs – working together on missions protecting the community of Adventure Bay.

Each dog has a specific skill based on a real-life profession including Marshall being a firefighter, Chase who has responsibilities similar to a police officer and Rubble who serves as a construction dog.

Skye serves as an aviator and goes out on her missions flying a pink helicopter.

Snow rescue dog, Everest was added to the cast in season three of the show and appears occasionally.

Paw Patrol has been awarded several awards since being launched in 2013 including 2015’s Toy of the Year Award.

Spin Master introduced the shows toy line in 2014 and it quickly became their most profitable brand.