A REVOLTING video shows a live worm from a monkfish wriggling on a plate – as children shriek in the background.

Even worse, the repulsive parasite was only noticed as Claire Barley cleared up after their evening meal.

The intruder, most likely an anisakis worm, was found in monkfish Claire bought from Morrisons. Eaten live, the worm’s larvae can cause serious health problems.

Claire, who lives in Chesterfield, Derbyshire, sat down to dinner last night with husband Michael and their two children after griddling the fish.

Shortly after starting the meal they feared the fish, which sells for up to £29 a kilo, was undercooked and lost their appetites. It was only while clearing away that Claire spotted the unwelcome guest on her plate.

Claire, an accountant, posted a video on the supermarket’s Facebook page., writing: “So this has given me and possibly the husband the diarrhoea and vomiting.

“It’s an anisakis worm from monkfish bought from your Staveley store yesterday.

“My husband has tweeted it and you want to compensate us with points on ur card. Are you joking? This could make us ill for up to three weeks.

“I don’t think that’s nearly enough. Absolutely disgusted. Fresh fish it may have been, expensive too. Did not expect this or the illness to come from it though. Disgusted.”

The video is of a close up of the worm alive and wriggling on a dinner plate with Michael sarcastically saying: “Lovely”.

One child is screaming and another describes the worm as “disgusting”.

One of the children is pretending to dry heave and Michael speculates that the worm is in there fish because: “I think it’s when the fish is fresh”.

Claire said: “I cut the two fillets off the bone and griddled them with some seasoning. We began to eat them and my husband thought his was a little underdone, which put us both off eating it.

“I scraped mine onto his plate so he could throw it away, the next thing I see this thing wriggling in my plate so shouted my husband and he took video of it. 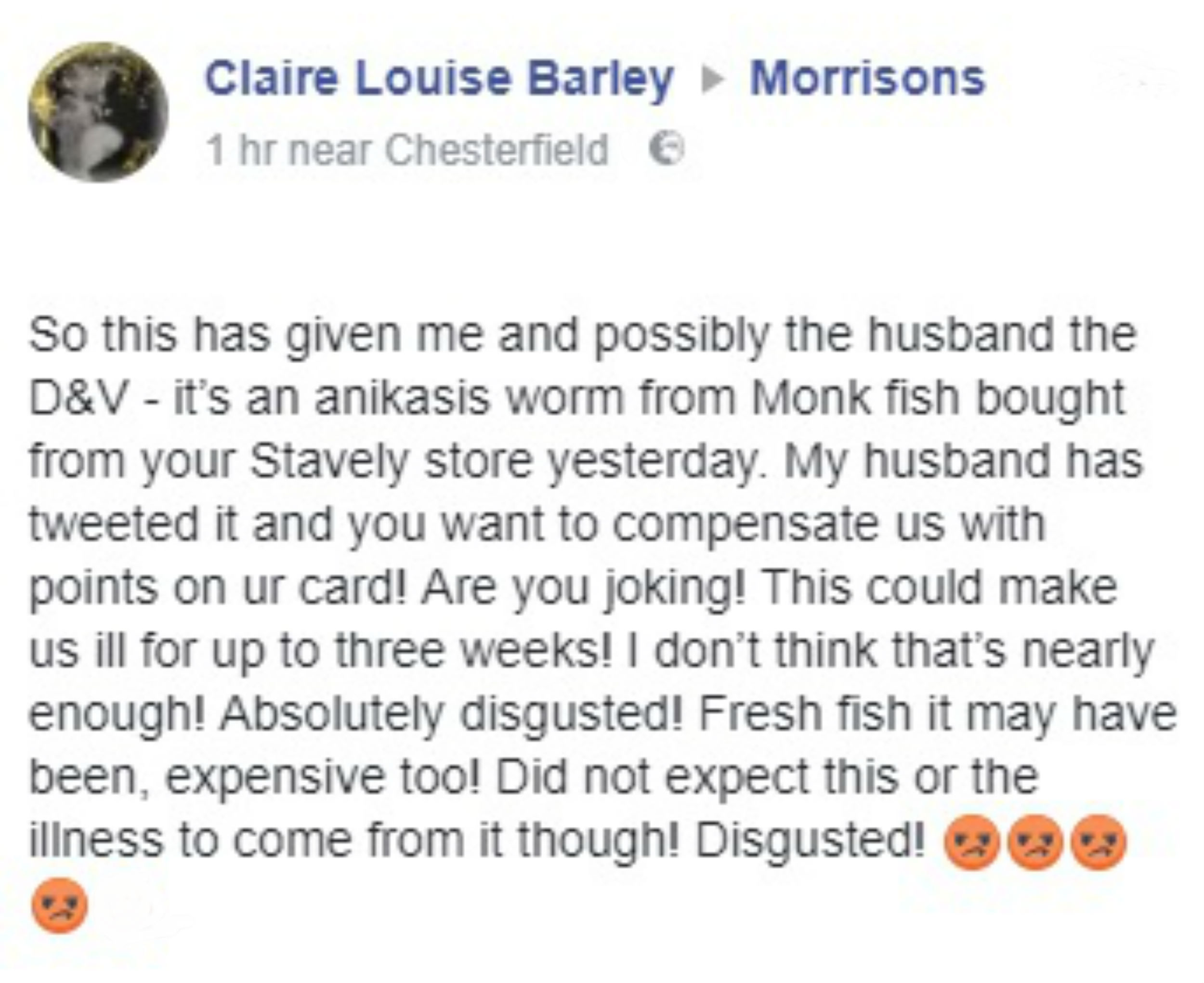 “My kids saw it too. I just felt disgusted by it. Now I’m actually ill with an upset stomach.”

Claire continued: “You can tell my kids’ reaction from the video.”

A Morrisons spokesman said: “Certain fishes sometimes pick up these worms naturally from their ecosystem.

“They do not pose a risk to human health. Although we make every effort to screen these out during the skinning or packaging processes, they may be present on very rare occasions.”

But the NHS are clear on their website about the risks of eating a live anisakis worm.

They state: “Parasites in fish, particularly anisakis larvae, can cause health problems if eaten alive, including abdominal pain, diarrhoea and vomiting, blood and mucus in stools, and mild fever.”

In order to avoid the potential for parasites in your fish, the Food Standards Agency recommend that you freeze your fish for, at least, four days.

On the NHS website, the FSA have posted guidelines for how to handle, store and cook fish. They also have regulations for stores that sell fish.

“Food businesses that sell fishery products are required to visually examine the fish to check for parasites and they must not sell the products if they are obviously contaminated with parasites.”