BIZARRE video shows the moment an entire family of swans held up traffic on a a city road.

The adult pair and seven cygnets amazed drivers by waddling along a road in the Whitfield area of Dundee.

The video was captured by Reece Robertson who was commuting on a bus when he saw the marching swans and cygnets on the other side of the road.

Reece, 23, had an appointment in the city centre on Thursday morning and was stunned to find the family holding up traffic in the unusual video.

Reece, a Dundee University student posted the video on Facebook and said: “Just caught these bad boys holding up traffic”.

The video shows two cars driving very slowly on either side of road as fluffy figures appear to be holding up traffic.

Reece who is on the bus zooms in on his camera to reveal a family of swans and cygnets walking in the middle of the road.

The two parent swans are seen leading from the front, with a trail of cygnets following one by one closely behind.

The cygnets waddle one step at a time as the bus slowly moves passed the swans without disturbing them.

A chuckle from Reece can be heard as other passengers on the bus speculate where they are going. 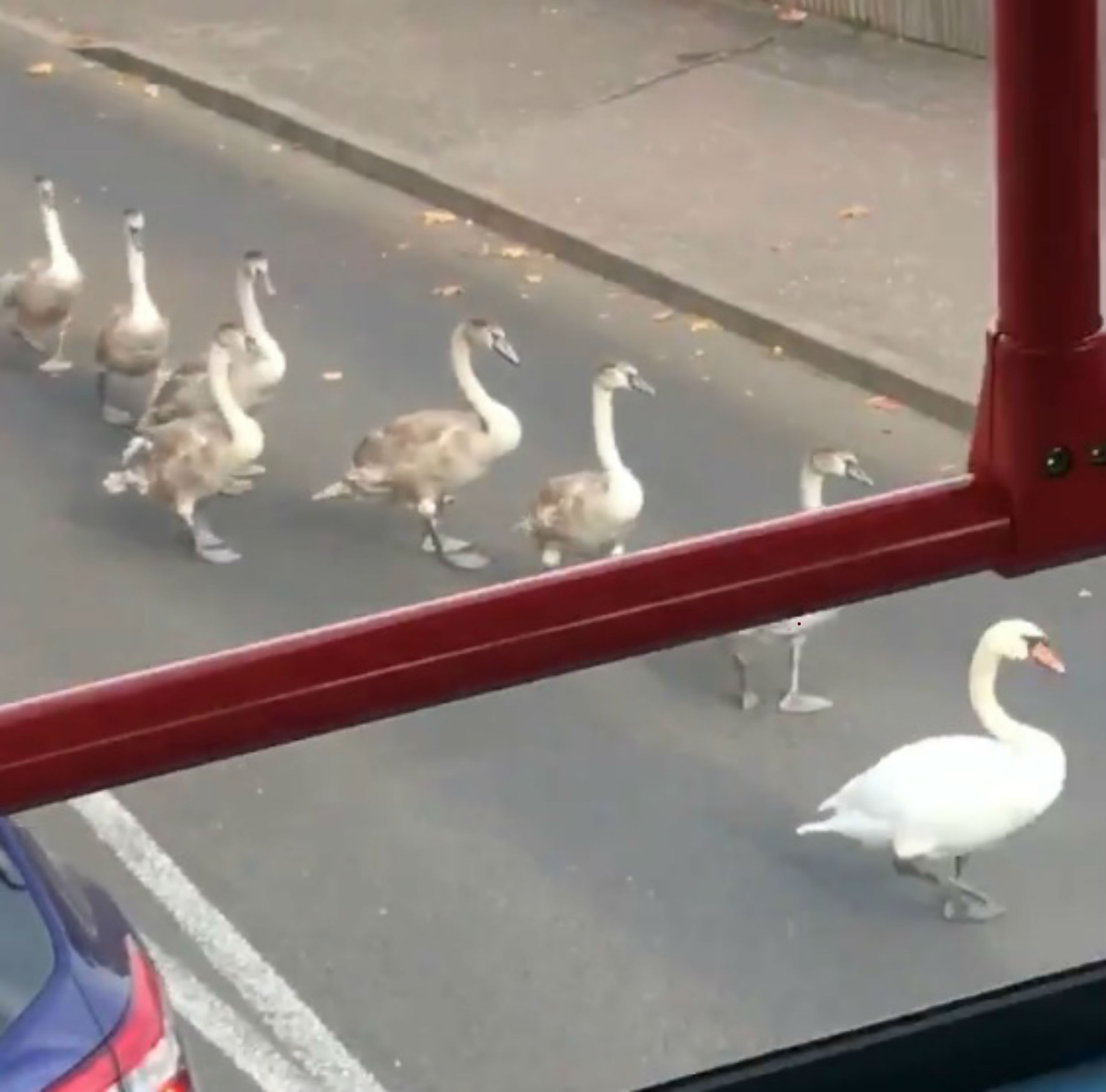 Online, Steven Mawhinney said: “The swans have been called in to deal with they p****s that have been terrorising Whitfield”.

Reece replied: “No meaner nor militant force in Whitfield’s history”.

Darren Graham added: “Away to chap Jim’s door. they heard he’s got there cousin stuffed in his freezer cut up into nuggets”.

Reece who has a Masters in English and Creative Writing was amazed by what he saw.

Reece said: “It’s a funny way to start the day seeing a family of swans slow down traffic.

“It happened on Ormiston Crescent. I was able to see them walk off further, and the car crawling slowly along behind them. I have no idea what happened beyond that though”.

Reece was unsure about where this family came from.

Reece added: “There are no ponds, but quite a few parks scattered around. My best guess would be the nearby fields or Tarzan’s Island a small forest which has stream.

“They might have a nest somewhere there and just wandered out”.

A spokeswoman from the Scottish SPCA said: “We can confirm we were alerted to a swan and cygnets walking along a road in Dundee this morning.

“Upon our arrival the swans had left the area. If anyone spots a swan on the road they should call our animal helpline on 03000 999 999 for assistance as soon as possible.”

Earlier this year a family of swans held up traffic on the busy A90 in Aberdeenshire.

The two swans and seven cygnets were seen waddling at rush hour back in June.