A TOP Edinburgh Chef is representing Scotland at the British Embassy in Uruguay this week as they showcase the best of British produce to an international audience.

Barry Bryson, who owns private event catering company, Cater Edinburgh, will take part in over 12 foodie events where he will show off his culinary creativity in front of an audience of over 100 people, including a number of Uruguay’s celebrity chefs and the judges from the Uruguayan edition of TV’s MasterChef.

The events are part of the Department for Environment, Food and Rural Affair’s ‘Food is GREAT’ campaign and have been designed to boost British trade in food and drink exports.

Iam Duddy, The British Ambassador in Uruguay: “We believe that Barry is a great ambassador for Scotland and the rest of the UK.

“His cooking, passion for produce and commitment to excellence by using seasonal and sustainable ingredients perfectly matches our work with the ‘Food is GREAT’ campaign.”

Barry, who is committed to using seasonal and sustainable ingredients, has been serving British produce with a twist, including dishes such as carpaccio of Aberdeen Angus beef with dried lemon, gin-cured salmon, dill-crusted sea bass with beetroot crumble and treacle tart with an orange and basil salad.

Barry added: “I’ve been blown away by the quality of the produce here, especially the Aberdeen Angus beef.

“What has made it even better has been collaborating with the Chef and the team here on creating dishes and menus that reflect me and how I cook, but also acknowledge the surroundings and environment.”

His 20-year career includes developing and operating five successful small dining businesses within Scotland’s arts sector, which allowed him to showcase Scottish ingredients and cooking long before it became the norm. 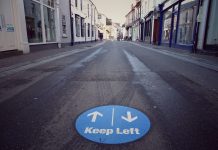 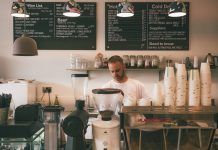