THE CORONAVIRUS pandemic has cast a dark shadow over the nation and the rest of the world, but in the Hanlon household a son is shining.

Paul and wife Danielle were thrilled to welcome baby Cody into the world on April 8, a brother for two-year-old Ollie.

It can be a stressful enough time for any young family, never mind in the middle of a global health emergency.


But Hanlon insists any fears they had about stepping through the doors of a hospital in the current crisis were soon eased by the ‘brilliant’ staff at Edinburgh Royal Infirmary.

And the Hibs stalwart admits the football shutdown has had its positives as he has been able to make the most of new arrival.

He said: “It’s a terrible period for everyone at the minute, being in lockdown.

“But for me, personally, and for my wife as well, it’s worked out great, because for the last couple of weeks of her pregnancy I was in the house and able to help out with my oldest boy, Ollie, and do other things around the house to help her.

“And, obviously, I was still off when Cody was born. So, I’ve had the last few weeks to spend good quality family time and getting Ollie used to Cody being in the house.

“It’s been great having that time in the house as a family.

“The day after Cody was born I would usually have had training or a game or whatever, and then it would have been back into the routine and away.

“So, it’s worked out really well to have this time in the house together.

“On the other side, it’s been horrible for everyone, family and friends, not to be able to come and meet him and congratulate us.

“But it’s probably been good for Ollie, not having visitors flying through the door, desperate to see Cody.

“He’s settled in nicely but everyone is still just desperate to come and meet him.

“And it’s a shame how quickly they grow at this age – by the time everyone sees him he’ll be a lot bigger than he was when he was born.” 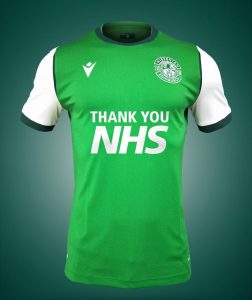 As for the birth, Hanlon added: “We were a bit concerned going in to the hospital, with everything that is going on.

“But when we got there and got into the labour ward it was great. All the staff were brilliant, we felt really safe.

“The only downside was an hour or so after he was born I had to leave and I wasn’t allowed to go back to the hospital until it was time to pick them both back up, which was a couple of days later.

“But my wife and I felt really safe and we didn’t feel at risk in that environment, thanks to the staff and everyone there.”

The experience has given Hanlon an insight into what the NHS is having to cope with during the Covid-19 crisis.

Whilst doctors and nurses battle on the front line against the deadly pandemic, babies are being born and other patients are being treated.

It makes the vice-captain all the more thrilled that Easter Road chiefs have decided to honour the health service on the front of next season’s jerseys and also by offering free match tickets for workers.

The 30-year-old added: “With Covid at the moment, it’s a massive workload for all the NHS staff, but you can forget there’s other illnesses that people are suffering from in everyday life that need to be treated as well.

“There’s a lot going on and having been in that environment and seeing what a great job they do it makes you really grateful.

“It’s amazing what Hibs have done with the message on the front of the shirt. It’s had a fantastic reaction and it makes you really proud to be a part of the club when they do things like that.

“Probably for too long, I think NHS staff have been taken for granted. But when you come to a crisis like we’ve got just now it really hits home how important they are and what a good job they do.

“All the credit they’re getting is exactly what they deserve.”