A GRIEVING dad whose son was stabbed to death has made an emotional plea in the Scottish Parliament for all knife thugs to be jailed.

John Muir, 69, took 15,000 signatures on his “Damian’s law” petition to ministers and told them: “It’s now up to you guys to sort out knife crime.” 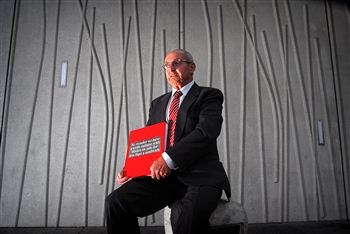 The Muir family were shocked to discover their son’s killer Barry Gavin, 21, jailed for a minimum of 15 years, was on bail at the time, charged with three separate assaults.

Two involved a weapon and he had two previous convictions for carrying a knife.

With the backing of his local MSP, two QCs and football supporter’s clubs for Rangers, Celtic and Greenock Morton, John travelled from Greenock to speak to ministers at the public petitions committee in Edinburgh.

He was joined in parliament by his son Christopher, 40, and daughter Karin Forrest, 32.

Retired joiner John told MSPs that he received a letter from the Scottish Prison Service stating killer Gavin would be entitled to leave prison for home visits after 11 years in prison.

“When our son died, we soon got over the sorrow when we thought we could stop other families going through what we went through.

“There are too many people talking and not enough being done.

“People are looking for protection by the law. They want the street back and for their children to be safe.

“But it’s not a one party thing; it’s up to everyone.

“We know you as MSPs can sort it out. It’s up to you guys to sort out knife crime.”

The Muir family’s got the longest ever hearing by a petition committee in the Scottish Parliament according to chair Frank McAveety MSP.

He said: “It was a quite powerful address and the longest we’ve taken on a petition, which shows you the seriousness with which we are considering it.”

Over 500 people have been stabbed to death in Scotland in the last decade, giving the country one of the highest murder rates in Europe.

No political party has yet formally backed the proposal to change the law, but individual MSPs have supported the call.

After delivering his speech to parliament, John said he had already met justice secretary Kenny McAskill to discussing changing the law.

John added: “He understood where we were coming from, and we know where he’s coming from.

“Hopefully we can meet in the middle.

“I know of people who have moved away from Inverclyde because of the knives and violence.

“Scotland was once a leading nation in medicine and science, but now we top the leagues for murder and knife crime.”

Damian’s brother Christopher called for prisons “to be made harder.”

He told MSPs: “Take away their Playstations and computers and make the jail a jail.

“The OAP can’t afford to heat their own homes, but the prisoner can put his heating up to 68 degrees if he wants.”

Damian’s sister Karin said he brother would still be alive had the law been in place last year.

She said: “The person who killed my brother had nothing to be scared of.

“He was out on parole for other things and there was nothing there to stop him killing my brother.

“A stronger law would have saved the life of my brother.”

The Muir family’s local Labour MSP for Greenock and Inverclyde Duncan McNeil the brutal murder “was horrifying for his family and the wider community.”

He said: “The SNP government must ensure the voices of victims, including Damian’s father John, are heard.

“The fact that 15,000 people have signed this petition asking the parliament to consider mandatory sentences for knife crime shows this is a matter that people are deeply concerned about.

“We need more than rhetoric from Kenny MacAskill on this issue, we need to see action.”

Having advised the Muir family on how to approach the petitions committee, Paul McBride QC said Damian’s law should be one of the first matters addressed in the parliament’s new session.

He said: “I support the campaign to get tough on knife crime and educate young people that if they carry a lethal weapon they will receive a custodial sentence.

“Damian’s law should be a priority for the next session of the Scottish Parliament.”