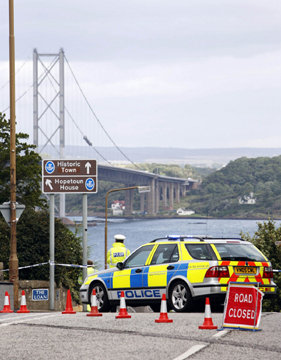 A WOMAN was crushed to death under a petrol tanker while crossing a road to catch up with her husband.

The 62-year-old – named locally as Liz Kettle – was said to have slipped on the wet road before being hit by the truck.

Police rushed to the scene and she was stuck under the lorry for several hours while emergency services tried to remove her.

It is understood the woman had been visiting South Queensferry with her husband.

The collision – at 9.15am on Thursday – has been described as a “tragic accident” and police are appealing for witnesses.

Locals living near to yesterday’s crash scene in South Queensferry’s Station Road said the junction with The Loan was an accident waiting to happen.

Shocked church-goers at St Margaret’s Church opposite the crash prayed for the dead woman’s family.

Father Tony MacDonald said: “I have heard an observation that the lady slipped while running. We don’t know her at the church but we had a service this morning and prayed for her husband and the family.

“There is a very subdued atmosphere now in light of today’s tragedy.”

He said that parents at the nearby Queensferry Primary School were worried for their children’s safety.

He added: “It’s fortunate the children would have been inside school at the time of this. There are areas where vehicles speed around here and there have been accidents on The Loan in the past.”

The junction connects a primary school, nursery and two churches but the lack of safety measures on the busy corner is “a scandal” according to Tom Martin of Queensferry Community Council.

He said: “It’s very sad news but I’m not surprised this has happened. The road is steep with many blind spots and we’ve been pressing for yellow lines here for some time. That could have prevented this accident from happening.”

He added: “It’s a scandal, but these things take years to get through the system.”

The trucker’s boss Ron Tomal of Brogan Fuels didn’t want comment on the crash but gave his sympathy to the woman’s family.

Lothian and Borders police confirmed that a 62-year-old female had died as a result of a road collision.

A spokesman said: “This is a tragic incident, and we are appealing for anyone who was in the area at the time, and who saw what happened, to contact police.”