Mason to the rescue as builders come under attack 197 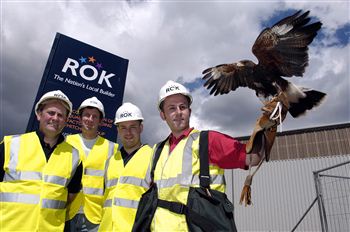 WORKMEN at a building site are so sick of dive-bombing seagulls that they have employed a new security guard – a hawk called Mason.

Builders at the Thomas Mitchell Homes site in Kirkcaldy took action when they found themselves under attack from the birds who were nesting nearby.

They were worried that the territorial birds would build nests on the site forcing work to come to a halt.

Now the team – who work for Rok – have enlisted the help of the Harris Hawk to scare off the aggressive gulls.

And since Mason’s arrival, he’s managed to stop the menaces from pestering the workers and prevented them from nesting among the new development.

Mason has now been named an honorary member of the team by grateful staff.

Site manager Scott Ferguson said: “These birds are a well-known menace on building sites across the country. Their droppings create a mess, they scatter rubbish and can attack people especially when they are inclined to start building nests.

“The team on site were really suffering from the problem so we contacted a local falconer to help move the birds on humanely, away from the work.”

After a rise in Seagull populations by 20 per cent was announced, ministers made plans for a cull.

But Scott said that was never an option for Rok: “Using hawks like Mason to move gull colonies on is a kind, humane solution. Falcons do not attack the other birds but their presence does frighten the gulls away.”

Mason first visited the site in June – just before nesting season – and he has made periodic returns since.

And his presence appears to be working as the builders have reported no gulls nesting on the site.

Scott added: “On building sites nesting seagulls can result in long costly delays to work, the law protects nesting birds from being disturbed so if a gull had made a nest on our site we would all have had to stop work until the eggs hatched and ypuingsters left the nest.

“We are all very grateful to Mason who has helped us make the site safe and we definitely consider him an honorary member of the Rok team. “