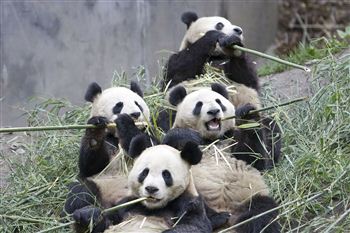 GIANT Pandas could be saved by global warming – because it’s good for their diet.

In a bizarre twist of fate, boffins found that climate change can actually HELP bamboo flourish, which makes up 99 per-cent of the Panda diet.

There are now hopes the research by experts at the Royal Botanic Garden in Edinburgh will safeguard the endangered species’ future.

A team of scientists returned from China yesterday (Wednesday), with “striking” results they say could change the way Pandas are protected.

They predict the number of bamboo species will increase with global warming – helping fussy eaters like Pandas, which rely on up to 20 different kinds of the plant to survive.

“Our studies show that some of the bamboo species is likely to increase in range with the warming of the climate.

“Of course it doesn’t mean climate change is a good thing overall; it simply highlights how quickly plants react and change and move around.

“The Chinese authorities regard the Panda’s image as an important tourist attraction because it makes them millions, so hopefully they’ll take note.” 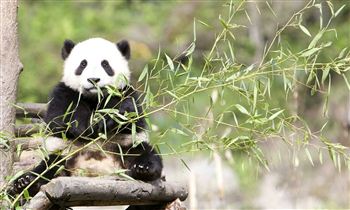 The findings are now with policy makers in China, who are considering investing in extending the rainforests to allow Bamboo to flourish.

Scientists from Edinburgh and the University of York teamed up with Chinese collaborators to develop a special computer programme that forecasts the future climate.

They used the technology the predict changes in the Pandas’ tiny home range in Sichuan province, Western China.

York Uni’s Dr Jon Lovett said: “The results were particularly striking in that some of the key food plants were badly affected, whereas others actually increased their ranges under global warming.

“So the impacts of climate change are complex, favouring some species while making others rarer.

“We should also remember that though the Giant Panda can help us focus attention on climate change, it is not the only species that will be affected.”

The development was welcomed by WWF Scotland, whose logo of a panda is said to be the most recognisable on earth.

“While climate change is normally bad news, this may well be different.

“The fact China are considering investing in extra land for the rainforest is very pleasing to hear.

“We were one of the first non-governmental organisations to be given access to China’s pandas many years ago, and still to this day continue to campaign for their safety.”