Fly Puff Leads To Lock Out 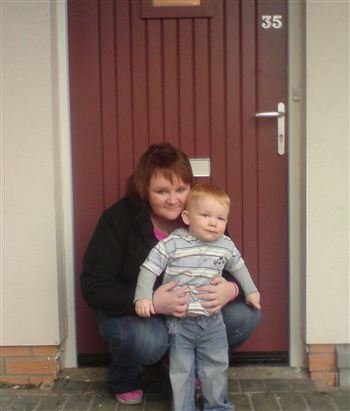 A YOUNG mum is considering giving up smoking – after her toddler son locked her out of her own home.

Clare Rose, 19, found herself stranded outside her ground floor flat as she popped out for a quick, late night ciggie.

But as she grabbed a few puffs, her 20 month-old son Leon toddled to the front door and locked it tight.

Frantic Clare, from Tranent, East Lothian, then had to call the fire brigade to wrench open the door and reunite her with her distraught son.

She said: “I’d just nipped out for a quick cigarette about 10pm when I heard the lock turning on my door. I looked through the letterbox and Leon was just standing there smiling at me.

“I ran to the back door, but it was locked too. I was so anxious, and as I started to panic Leon became hysterical. He wouldn’t stop crying when he realised he couldn’t open the door again.

“He must have heard me nipping out and gotten up to see what the noise was.

“I’m seriously thinking of giving up smoking, because I can’t go through anything like that again, anything could have happened to him.”

After finding herself locked out Clare phoned her father in a state of panic who told her to call the emergency services.

The fire brigade arrived within ten minutes of the call and managed to wedge the door open without causing too much damage.

But the sight of the sight of six burly firemen sent Leon into more fits of tears and now the tot is scared to go near the front door.

Clare said: “When I was waiting on them coming I had to talk to Leon through the letterbox and try and calm him down.

“He was crying and screaming, but eventually I managed to get him laughing by pretending it was all a big joke.

“But, Leon looked terrified when we eventually got the door open and now he won’t go near the front door, which is a blessing in disguise really because hopefully this won’t happen again.

“He’s alright now, but he got a real fright.”

David McIntosh, acting watch manager, was one of the firefighters who came to little Leon’s aid.

He said: “We forced entry to the house through the front door in roughly five minutes.

“The wee boy was crying through the letterbox, but he calmed down once we got the door open.

“Fortunately, there was no damage to the property.”

Clare had nothing but praise for the fire service and their speedy response.

She said: “They were amazing that night and I’d really like to thank them for all their efforts.

“And if I don’t manage to quit I’ll definitely be taking my keys with me wherever I go.”