Angel nurses to the rescue for second time 337 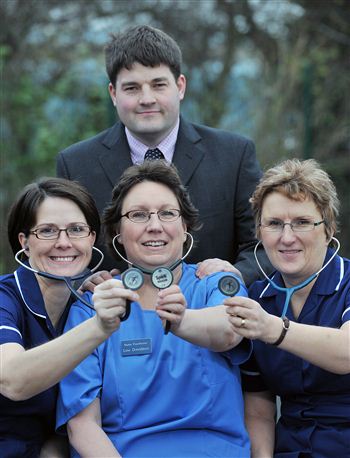 A FIVE-STRONG team of Scots medical TV stars are off to a tiny Carribbean island to help save some of the world’s poorest children.

The health team – who are currently appearing on ITV‘s Amazon Hope – are to travel to the poverty-stricken La Gonave Island, off the coast of Haiti.

Representing the Fife-based charity, The Vine Church, the modern day Angels will help to immunize up to 1000 of the island’s children from killer diseases such as typhoid and Hepatitis B during their 14-day visit.

The two doctors, Alison Dunn and Fiona Seaman, and the three nurses, Elaine Stark, Lou Davidson and Carol Hatton, have now started a fund-raising campaign ahead of their mercy trip next May.

The medics, who all work at various surgeries in Fife, starred on last year’s Amazon Hope programme, which followed the exploits of a Scottish charity setting up a health service for over 100,000 people in Peru.

Nurse Elaine Stark has revealed the plight of the poor villagers during that trip convinced her to repeat the life-saving expedition without hesitation.

She said: “Although some of the sights on the Amazon trip were pretty horrible, it has only inspired me to do more.

“The sight of these poor people benefitting from our intervention is quite uplifting, and hopefully we can really do some good when we go out to Lagonave.

“We are not quite sure what to expect interms of safety and hygiene, but whatever hardships we have to face I’m sure it will be nothing like what the islanders have to put up with on a daily basis.”

Residents on the western side of the island are known to walk up to ten miles per day to collect clean water.

While there, the Scots will have to contend with a lack of clean drinking water, risk of infection and a lack of basic foods.

To combat the health risks the Scots team is taking their own food and chef with them, and has arranged to have bottled water shipped in from the mainland.

They will undergo an arduous 36 hour journey involving four plane trips and a 2 hour bus jaunt just to reach their destination.

Justin Dowds, from the Vine Church charity, is overjoyed the medical team is willing to travel halfway around the world to help some of the world’s poorest children.

The former pharmacist is also joining the medics on their life-saving trip when they fly out in May.

He said: “Although it is a quite a dangerous place these nurses and doctors deserve all the plaudits for agreeing to the trip.

“We hope to immunise up to 1000 kids and also give them a full health check when we are in Lagonave, and the charity is also involved in the building of roads and water wells for the local population.

“Up to 40 per cent of the island’s children has contracted typhoid, and combined with no sanitation and hardly any clean drinking water it clearly illustrates how bad the situation actually is out there.

“We are also hoping to start building a hospital when we are there, as the current facilities are pretty basic.

And Fife MP Willie Rennie believes the mercy team deserves immense credit for risking their lives in the pursuit of helping others.

He said: “In this country nurses are cherished and saluted for the valuable care and support they provide to their patients. In so many other countries, like Haiti, people can only dream of this.

“In a small but significant way these nurses are helping to make these dreams come true.

“This valuable work will help to improve their lives. Nurses, thank you.”

In total the trip will cost around £40,000 to finance the medical supplies, with the nurses and doctors agreeing to pay for their own flights.