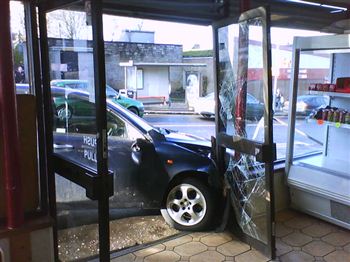 A YOUNG mum and her 12-week old baby had a miracle escape – after they were hit by a runaway car.

Mum Emma Broadley and her newly-born girl Lily-Anne were crossing at a pedestrian crossing in Armadale, West Lothian, when a parked car suddenly rolled down the busy street crashing into the pair.

The startled mum and the tot were sent flying into the middle of the road before the car carried on its course hitting another pedestrian, Fiona Easton, and eventually coming to a stop embedded into a butcher’s shop front.

Horrified shoppers rushed to help the three injured pedestrians, before an ambulance was called at around 11.45 on Saturday morning.

Luckily, the three pedestrians only received minor injuries after the horror crash.

Seconds before the collision, a female driver was seen parking a blue Alfa Romeo about 60 yards from the crash scene in the town’s South Street.

A report is currently being submitted to the Procurator Fiscal.

Derek Sneddon, 33, of J&K Dewar’s Butchers, said: “I was in the back shop cutting when I heard an almighty crash. I thought there had been an accident on the road outside but couldn’t believe my eyes when I saw the car halfway inside the shop.

“What puzzled me was I couldn’t see the driver and there was no time for them to have got out before I got there.

“One woman was lying half-in the shop and I rushed to help her it was only then that I heard another woman screaming because her child was lying on the road.

“Luckily, the car only clipped the buggy, otherwise it could have been so much more disastrous.

“Another few seconds either way and they could all have been killed.”

“The woman whose car it was came down the street 10 minutes later as she had been in the post office and thought her car had been stolen. She was so upset when she realised what had happened.”

Staff from the nearby Craft Cuts hairdresser helped to treat the injured three before the ambulance team arrived.

Barbara McLeish, 27, said: “I was working in the shop when I heard the crash. Thinking it was just a bump in the street I was totally horrified when I saw the buggy toppled over and the baby lying in the street.

“The mum was screaming but soon calmed down when we brought her into the hairdressers. I think it was just the shock of what could have happened that sent her into hysterics.

“She only had bruising to her shoulder and hip and the baby had a few grazes on its face.

“In a way, they were all so lucky as it could have turned out so much worse.”

Ms McLeish also revealed the partner of Ms Broadley came to the shop on Monday to thank the staff for all they had done.

He told them Ms Broadley and little Lily-Anne were both shaken by the incident, but had suffered no long term injuries.

A police spokesman confirmed a report is being prepared and will be submitted to the Procurator Fiscal.