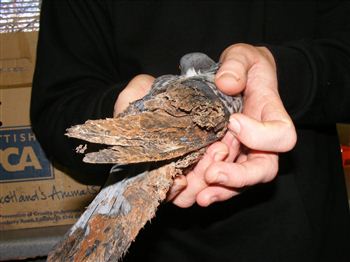 A SCOTTISH SPCA worker thought colleagues were winding her up when she got a call to pick up a chocolate covered pigeon – but it was no joke.

Now nicknamed Wonka, the bird flew into a chocolate fountain, coating itself in the liquid treat.

Staff at Thorntons watched with disbelief as the bird bombed into the shop and dived into the cascading confectionary.

After being shooed out the front door, staff noticed that their feathered friend couldn’t fly so they called out the Scottish SPCA.

But the charity thought it was a joke until sales assistant Vicky McMillan persuaded them otherwise.

She said: “The animal rescue crews thought it was a hoax at first. But we assured them we were serious.”

She said: “I got the call just after lunchtime on Saturday to say there was a chocolate coated pigeon walking around Edinburgh and I just thought is this some of my colleagues playing a trick on me because it was my first day.

“But, sure enough, when I got there, the pigeon was covered in chocolate and unable to fly.

“The staff had originally shooed it out of the shop but later noticed the chocolate had dried to its tail feathers, meaning it could only walk.

“I caught it in a net and took it to our Wildlife Rescue Centre in Fife where it is recovering well.”

After a good clean and a rest, Wonka will be released back into the wild in a week.

Colin Seddon, manager of the wildlife rescue centre, has never seen anything like it before.

He said: “Because pigeons live in the street, they often get themselves into all sorts of trouble and this isn’t the first we’ve cared for.

“However, this it the first I’ve ever heard of that has managed to cover itself in chocolate.

“Because it was in a fountain the chocolate was softer, but by the time it came to us it had started to set.”
He joked: “The only long term effect might be a little weight gain.”

Although Wonka survived the scrape, the chocolate wasn’t so lucky, with over £50 worth of the sweet treat having to be thrown out.

And he wasn’t the first pigeon to wreck havoc in the Princes Street branch of Thorntons, as 25-year-old Vicky McMillan explained.

She said: “About two years ago there were three birds that flew into the shop and landed in the chocolate fountain. That cost us over £100 of chocolate.

“Short of keeping the doors closed there’s very little we can do but it doesn’t happen very often.”