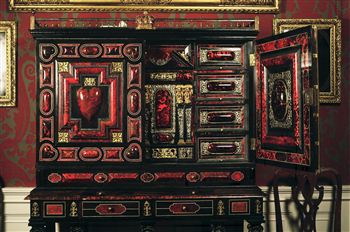 THE STORY has all the hallmarks of a 17th century soap opera – royal scandal, family fueding and a sordid love triangle.

A wonderful tortoiseshell cabinet which was bequeathed by King Charles II to the woman who posed as Britannia is on display at a historic Scots country house.

The cabinet is a sign of the unrequited love the King had for Frances Stewart – the lady who eventually married his cousin.

Charles went to extraordinary lengths to try and marry the woman who he described as “the loveliest woman in the world”.

Currently on display in the Stewart Room of Lennoxlove House in East Lothian, the King gave the stunning tortoiseshell and brass cabinet to Frances Stewart, “La Belle Stuart”, who posed as Britannia for various coins and commemorative medals.

And even though the King’s infatuation continued throughout his life, Frances Stewart eventually went on to marry his cousin, Charles, Duke of Richmond and Lennox in 1667.

But as the Duchess of Lennox and Richmond, Frances contracted smallpox which had swept through London after the Great Fire in 1666.

Believing that she was disfigured from the effects of the disease and unable to reach her, the besotted King is said to have climbed over a wall to her house in Whitehall.

He had showered his love with gifts such as substantial grants and titles, and although she steadfastly refused to become his mistress she did accept the exquisite cabinet as a testament to his affections.

David Thompson, a guide at Lennoxlove House, said: “It has been said elsewhere that the cabinet would have been given to Frances  in 1668, however, this is slightly suspect when it is realised that Andre Charles Boulle would have been only 25 years of age at that time and only about three years into his career as a free artisan.

“It is more likely that the Duchess would have received it from the King at some later point in time – or that it was one of Boulle’s earliest pieces and created before he received the French Royal Favour in 1673.”

One of the many fascinating items at Lennoxlove House, the cabinet is veneered in tortoiseshell, brass and repousse silver and decorated with a crown and hearts.

The doors open up to reveal many intricate drawers surrounding an architectural cupboard set with guilt-brass and silvered metal figures which enclose a mirrored and tiled interior.

Frances left a bequest to her nephew Lord Blantyre to purchase the large East Lothian estate with the dedication that it should be known as “Lennox’s Love to Blantyre”.

Ken Buchanan, General Manager of Lennoxlove House, said: “The cabinet is a wonderful considering how old it is and the fascinating story behind it.

“We receive many remarks from visitors to the House about how beautiful it is.

“Lennoxlove House touches on so many important episodes of Scotland’s history and the collections on show here reflect family intrigues and political skullduggery.”

Dating back to the 1300s, Lennoxlove House is steeped in Scottish history, having been owned by the Maitland family, the Stewarts and most recently the Duke and Duchess of Hamilton.

In 2006, the Duke and Duchess began an extensive renovation project to repair and restore the House, which is home to the prestigious Hamilton Collection including works by van Dyck, Raeburn and Kneller and displays of antiquities and curios, including Mary Queen of Scots death mask, and her 15th century silver casket.