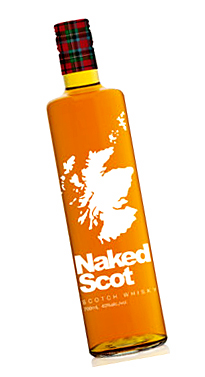 AN AUSSIE drinks company has come up with the perfect gift for Scots – a hangover-free whisky.

Naked Scot is distilled on the Isle of Mull and its makers claim the blend will have barely any effect on the head in the morning if drunk to excess.

But the Scotch Whisky Association (SWA) is furious at the implication that other whiskies do contain pesticides.

Sold in a cylindrical glass bottle embossed with a map of Scotland and finished off with a tartan screw top, Naked Scot is not yet widely available in Scotland but is expected to become one of the top-selling brands Down Under.

Launched last month, the hangover-free whisky is creating a buzz among aficionados at the Edinburgh Whisky Blog.

One reviewer wrote: “The company’s plan seems to be to avoid chemicals to improve your hangover experience. As I am suffering a particularly brutal hangover today, I believe this is a noble cause.

“I guess the problem is that the hangover is generally the product of dehydration, lack of salt/sugar and being haunted by something that happened the night before. Even so, every little helps, right?”

But fuming officials at the SWA described the Australian company’s claims as “inaccurate and misleading”.

A spokesperson said: “The claim is misleading because the science of distillation means there is no question of ‘residual herbicides, pesticides and fungicides’ being in any bottle of Scotch whisky.”

The group also added there is some doubt over whether Naked Scot is a single malt or a blend.

The spokesperson said: “It is a good example of why the new Scotch whisky regulations – which should be implemented later this year – are needed to avoid consumer confusion.

“The regulations will require that it is made clear on the label the category of Scotch whisky.”

And health experts have warned that pesticides and other chemicals have little impact on hangovers.

The major cause of a hangover is dehydration – which can trigger headaches, a dry mouth and have a damaging effect on the stomach causing nausea.