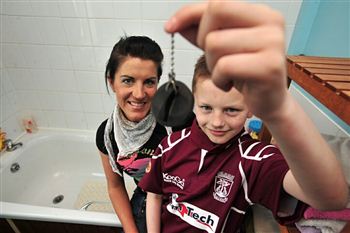 A SUPERFIT boy hero saved his mum from drowning by hauling her out of the bath by her hair.

Aidan Smith, 10, found his mum Amanda unconscious and underwater in their bathroom in Galashiels.

But instead of panicking, the brave boy pulled the plug before using all his strength to drag the 30-year-old out on to the floor.

His relieved mum said: “If it hadn’t been for Aidan, I would have died – I am so proud of him.

“He is an amazing boy – I always knew he was intelligent and caring but I never thought he would save my life.”

Amanda had gone for a soak whilst Aidan and two of his sisters Madison, 7, and Lily-Ruth, 2, played downstairs.

She had asked her son to fetch her mobile phone while she relaxed in the bubbles.

But when he returned he found his mother under the water and not moving.

After shouting her name and getting no response, he tried to get her head above the water.

He yanked the plug out to empty the bath and then pulled her out of the tub by her hair.

Placing his mum in the recovery position, he covered her with a towel while calming his screaming young sisters down before he called his granny for help.

Amanda’s mother Sheila MacDonald works as a domestic porter at Borders General Hospital so Aidan knew she would know what to do.

Amanda said: “Water was spurting out of my mouth and I was coughing so Aidan banged my back.

“When my mum turned up, she said he had everything under control and was making sure I was kept warm.

“I don’t remember what happened at all until I was in the ambulance. They think it was a combination of my low blood pressure and the hot water which made me faint.”

The mother-of-four was given oxygen and rushed to hospital where she stayed under observation.

Amanda thinks it is partly down to her rugby-playing son’s weight-lifting which gave him the strength to remove all eight-stone of her from the bathtub on Tuesday February 10.

She said: “He plays rugby for the Mini Maroons and has little weights in his rooms that he uses trying to build up his muscles.

“It was probably a combination of fear, adrenalin and his weights-training that gave him the strength.”

And now Amanda is determined for her rugby-mad son to meet his hero – Scotland kicker Chris Paterson.

She said: “I went to school with Chris and bump into him from time-to-time but Aidan has never been with me.

“He would love to meet him and I think it is the least he deserves for what he has done.