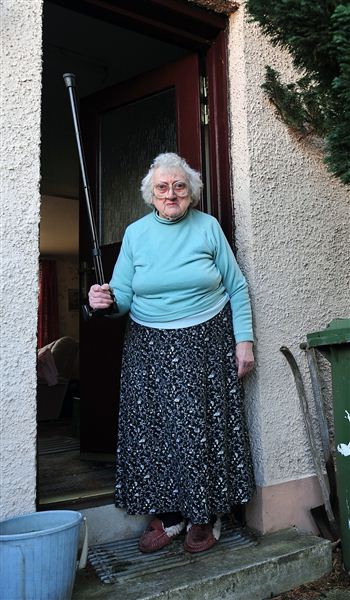 A FRAIL great-grandmother bravely stood up to four thugs as they broke into her house – and stole her bingo winnings.

Margaret Catteral, 79, challenged the robbers when they brazenly brushed past her into her home and started ransacking her property in the late night attack.

The gutsy OAP, from Prestonpans, East Lothian, shouted at the group to “get out of my house” before trying to call for help.

But Margaret, who suffers from severe arthritis in both legs, was left helpless as the thieves had cut through her telephone line before entering her home.

The cowardly gang went through drawers, cupboards and her handbag before making off with around £160 in cash and some cherished jewelry.

The pensioner had just returned from her weekly trip to the bingo when the gang – one as young as 13 years old – appeared outside her home.

Startled by the four trying to lever open a back window Margaret bravely opened her door to confront the gang.

One grabbed the diminutive woman by the arm and dragged her into the bedroom claiming he was there to help because she had been burgled.

But the quick-witted pensioner soon realised things were not as they seemed when three other men appeared in her home around 11.45pm on Tuesday.

The fragile widow, who celebrates her 80th birthday in two weeks, started shouting at the gang as they went from room to room looking for more valuables, eventually scaring them off.

She said: “I heard a noise outside my back door and went out to see what was going on. One large man grabbed me and pushed back into the house saying I had been burgled and he was here to help.

“As we went into the bedroom another one must have come in and opened my front door to let the others in.

“I wasn’t scared at all, just more angry that they had the cheek to burst into my house.

“If I had had my walking stick with me I would have crowned the lot of them.

“I started shouting ‘get out of my house’ over and over at them, and I think it must have scared them off because they left a lot of jewelry.

“Luckily I had meant to pick my pension up that day but had felt a bit under the weather and left it. I’m so glad I hadn’t bothered because they would have had that away too.

“I had just come back from the bingo that night and some of the money they got was my winnings.”

Plucky Margaret was then forced to wake up her 90 year-old neighbour to phone for help after the robbers had fled.

The first suspect is described as 30 to 40-years-old, wearing dark clothing and a dark baseball cap.

The second male is described as 13 to 14-years-old with light coloured hair.

There are no descriptions of the other two men, and police are now appealing for anyone who saw anything suspicious to come forward.

A police spokesman said: “While the woman has not been injured, she was understandably shaken by the events.

“We are asking anyone who can provide information to help with our enquiries to contact police immediately.”

Frailty may be reversible for some people with rheumatoid arthritis