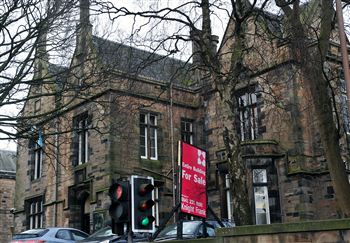 CLUBBERS could soon be drinking and dancing in the historic Scottish court building where evil Peter Tobin was charged with murder.

Despite having some of Scotland’s most chilling criminals passing through its chambers, court rooms and prisoner cells, Linlithgow Sheriff Court is hot property.

Experts reckon the winning bidder will have to fork out millions for the 1862 Tudor style B-listed building.

History buffs are upset that a planning blueprint in the court’s sales brochure reveals the imposing 1862 Tudor style court house could soon become a nightclub, a museum, nursery or even a dance studio.

They say turning it into a rave spot would be “disastrous” as it sits directly opposite the birthplace of Mary Queen of Scots – Linlithgow Palace.

With three court rooms and a century and a half of judicial history under its roof, the West Lothian court house sits in one of the county’s most prestigious spots.

This summer the current owners, the Scottish Court Service, are shifting all court business to a new purpose-built £50million complex in Livingston.

But they are tight-lipped over its selling price and the details of any offers made.

They have even gagged the PR company working for the court’s Glasgow-based agent, Knight Frank, insisting no details of any bids are leaked.

But the planning briefs show the court could also end up being used as an art gallery, tourist centre, restaurant or for civil marriage ceremonies.

Alan Young of the town’s heritage trust said: “A nightclub would be totally inappropriate in such an historic building.

“You can just imagine how naff it would be if they had a court theme and clubbers showing up in chains or handcuffs.

“That would be disrespectful to the poor folk like rape victims who gave evidence in the court.

“A nightclub in the court would be a disaster for Linlithgow. If we could raise a million pounds we would make it a museum of Scottish judicial history.”

A court insider said: “The court staff don’t care what happens to the court – most of us are glad to see the back of it because of all the bad memories of monsters like Tobin.” 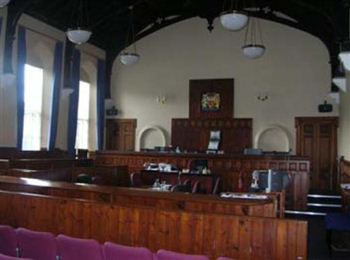 The court seller Knight Frank said: “All we can say is that there is no guide price for the building, so bids are being invited for the property.”

But a bidding war will take the court’s price over the million pound mark according to Liam Bailey, property expert and director of Scots firm Write About Property.

He said: “This property will sell for well in excess of £1million.

“Super prime properties are currently being snapped up by overseas buyers, and a big property with rich history and in such a location will fetch a fantastic price even in today’s climate.

“Think of all the rich Americans who flock to Scotland every year to trace their roots, and take in the history and beauty. Get two of them into a bidding war and who can say how high it would go.”

The court fell under the national media spotlight in November 2007 when 15-year-old Vicky Hamilton’s murderer Tobin went face to face with her father Michael.

The emotional confrontation came as psychopath Tobin, already serving life for raping and murdering Polish student Angelika Kluk, was led from a Reliance van into the West Lothian court building, where he denied her murder.

Grieving Michael walked slowly in front of Tobin’s prison van as it arrived and had to be restrained by police as he clenched his fists at the evil killer.

And last December the court saw the start of the case against Sifiso Justice Ngema, the 35-year-old charged with the attempted murder of nurse Magdeline Makola, who was discovered alive in the boot of her car on Boxing Day 11 days after going missing.

Strict planning laws mean turning the court into a nightclub won’t be easy.

He said: “It’s a right hassle trying to redevelop a court – you need permission just to hammer in a single nail.

“Nightclubs are usually quite dark and dingy and I suppose with good lighting and smoke machines you could put on a good rave in a court building.

“But I’ve got a soft spot for the heritage of these places, and building a nightclub would be going too far.”

Linlithgow’s councillor Martyn Day refused to even acknowledge the idea of the court becoming a nightclub.

He said: “I’m positive the building will attract a lot of interest from potential buyers, as the town is a great place to live, work and do business.

“Linlithgow has excellent transport links with Glasgow and Edinburgh, so I’m sure that the eventual owners of the site will be delighted with what Linlithgow offers.”

“Linlithgow court business will transfer to modern purpose-built facilities within the new Livingston Civic Centre in the summer of this year, providing better services for all court users.

“The existing Sheriff Court building will then no longer be required to run court business and is now being offered for sale on the open market.

“It will be for the eventual purchaser to determine its future use, with the consent of the planning authorities.”