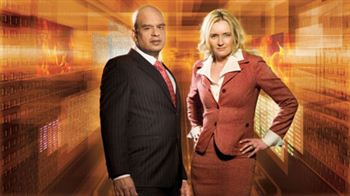 SCOTLAND’S richest Asian has been announced as the latest millionaire businessman to join the Dragon’s Den.

Shaf Rasul, an Edinburgh-based millionaire, will be joined by female Dragon Julie Meyer, and the two highly successful entrepreneurs will give Britain’s budding business men and woman the chance to secure up to £50,000 of investment for their ideas.

Inventors with the most innovative and entertaining ideas will be picked by the Beeb to be pitched to the online Dragons.

The encounters will be available to view online from March 30 and will be updated weekly.

The new format is to be hosted by Dominic Byrne, a newsreader from the Chris Moyles radio show, and he will be chatting to the new Dragons about their experiences, and finding out what goes on behind the scenes when the cameras stop rolling.

Shaf, 37, has made his millions in property and computers, and his E-net Computers business is worth an estimated £35m.

He also has extensive business and property interests in Dubai.

Listed in the Sunday Times Rich List, Shaf’s personal wealth is estimated at over £80m

He said: “I have always taken an innovative approach to my business interests and it is extremely exciting to be invited to join the BBC in launching this successful show to an online audience.

“I am a firm believer that it is people who make a success of their business and I look forward to identifying opportunities to provide the funding and operational support to take a business to the next level.”

Mario Dubois, executive producer of Dragon’s den online, said: “We know that the Dragons’ Den brand is massively successful as a television show, it’s synonymous with original ideas generation and the world of business.

“The Dragons Den online opportunity is a significant brand extension from TV into the digital arena, which enables the audience to take part and contribute.

“I believe that it is a major step forward for content on the web as well as using the functionality of the web in a new and creative way.”

In 1999, Shaf formed E-Net Computers, and his company has recently become Europe’s largest distributor of memory devices and the world’s biggest buyer of DVD and CDR Media.

He was shortlisted for the Ernst and Young Entrepreneur of the Year award and has amassed a personal fortune making him the richest Asian north of the border and the 27th wealthiest in Britain.

Shaf has also just opened a brand new £5m distribution centre at Edinburgh Airport and now has his sights set on the American market.