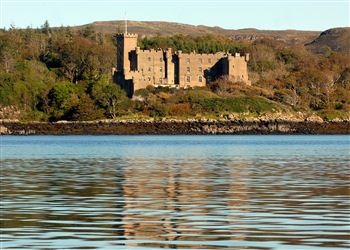 THE controversial Scots clan chief who tried to sell off the Cuillin Hills has left a staggering £15 MILLION in his will.

John MacLeod of MacLeod passed away in February 2007 after a long battle with leukemia, aged 71.

His will was published this week revealing the head of the 800 year-old clan left a total of £15,366,529.54. No details were yet available of how the money will be allocated.

But he is survived by children Elena and Hugh and his third wife Ulrika Tham.

It is understood he had another son from a brief relationship before his second marriage but was succeeded as the MacLeod Clan Chief by his son Hugh Magnus MacLeod.

It is thought to be one of the biggest wills ever left in Scotland.

Mr MacLeod caused public outrage when he put the famous mountain range in Skye up for sale to pay for repairs to his ancestral home, Dunvegan Castle.

John MacLeod was born John Wolrige-Gordon in August 1935, and was the second son of Robert Wolrige-Gordon and Joan Walter – the youngest daughter of Dame Flora MacLeod.

As a 16 year-old he changed his name to become his grandmother’s heir apparent, and in 1951 he was recognized by the Lord Lyon King of Arms in the name and arms of MacLeod of MacLeod.

He became the MacLeod clan chief in 1976.

MacLeod’s twin brother, Patrick Wolrige-Gordon, was just 23 when he was elected Conservative MP to represent East Aberdeenshire in 1958.

MacLeod was educated at Eton and the McGill University in Montreal before following his passion and studying at the London Academy of Music and Dramatic Art.

After a stint serving his National Service in the Black Watch, MacLeod began a career as an actor and singer, notably playing the King in My Fair Lady across Canada.

Known as a fine bass-baritone – he trained in Berlin and Geneva before doing repertory work in the UK – MacLeod recorded and released a number of albums including one of Scottish folk songs called MacLeod of Dunvegan in 1992.

The three-time married Scot was also known as a talented voice-coach and taught, amongst others, award-winning actress Maureen Lipman.

On becoming Clan Chief, John MacLeod inherited a run-down estate, but the talented businessman stimulated tourism by opening the clan seat to the public.

Visitors to the castle saw the fine collection of MacLeod treasures that include the great portrait of Norman MacLeod, 22nd chief, by Allan Ramsay which heralded a new era of heroic classical portraiture in Britain.

One of is happiest achievements was the creation of the Dunvegan music festival which opened in 1980 with the help of his second wife, Melita Kolin, a talented concert pianist.

The festival became incredibly popular over the following two decades and Yehudi Menuhin eventually agreed to become the festival’s patron.

Unfortunately, Dunvegan Castle fell into disrepair to the point the summer festival had to be cancelled and MacLeod decided to put the 23,000-acre Cuillen Hills up for sale for £10 million.

When he failed to find a buyer, he proposed transferring the mountains to public ownership under a plan which would have seen the castle transferred to a charitable trust.

However, Highlands and Islands Enterprise (HIE) said it could not afford the cost of refurbishing the castle, estimated at up to £19m.

In 2006, a £25m application was made to the National Lottery for a grant to restore the castle, tidy up the grounds and develop the existing visitor centre.

It was understood that Mr MacLeod would have given up ownership of both Dunvegan Castle and the mountains if the bid was successful.