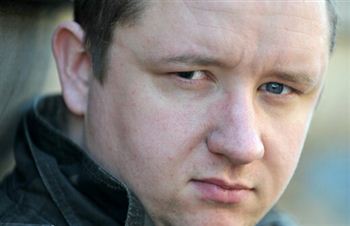 A FORMER soldier has told how his life was ruined when a paintball worker shot a gun at him, blinding him in one eye.

Allan Weir, 25, said he lost his job and needs surgery to save his eye after Calvin Blyth shot a loaded paintball gun at his face.

Blyth was working as a senior marshall at the Ape paintballing site in Ratho, near Edinburgh when the incident happened.

The 21-year-old claims he thought the gun was not loaded but failed to check the weapon for any paintballs before he fired it.

But at Edinburgh Sheriff Court he was escaped a jail sentence despite being found guilty of culpable and reckless conduct.

Sheriff Michael O’Grady sentenced Blyth to 150 hours of community service after saying it was clear the incident had been a “tragic accident”.

Dad-of-one Allan had begun working at the site in September last year and was only on his second day as a marshall when Blyth shot him.

The former Royal Scots infantry man was wearing no protective clothing and the paint pellet smashed into his right eye, crushing his eye ball.

Although he was rushed to hospital he was left blind in his right eye and needed eight stitches. Now he needs surgery in the hope he can avoid needing a prosthetic eye.

He said the blindness has caused him to lose all depth perception and makes even simple tasks difficult.

Allan said: “I can’t work, I can’t drive or use a computer now – it has completely ruined my life.

“I can’t do anything I used to enjoy doing.”

The court heard how Allan had started work at the paintball site the day before he was shot.

On September 7 last year he was helping Blyth and another workmate clean and prepare the weapons for customers who were coming later that afternoon.

Allan checked a weapon was not loaded before discharging the empty chamber at Blyth, blowing the compressed CO2 which powers the guns on his face.

But Blyth – who had been working at the site for 14 months – reacted by picking up a nearby gun and firing it without checking for pellets.

It turned out to be loaded and the paintball struck Allan on his right eye, knocking him over.

Allan said: “It felt like being hit by a hammer, I thought my eye had been burst.”

At court Blyth claimed he did not realise the gun was loaded, insisting he had picked-up one which should already have been checked. 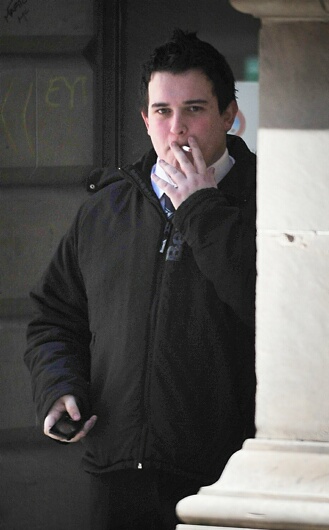 Allan said because of the unusual nature of the injury doctors were unable to treat him and he still faces worry over losing his eye completely.

Sheriff Michael O’Grady described the incident as a tragic accident adding that he had found the case difficult to deal with.

He said: “You are a self evidently decent, hardworking young man. I have no doubt that this incident could be characterised as a moment of madness”.

Sheriff O’Grady said he saw no public interest in jailing Blyth, of Ratho, Midlothian, and ordered him to carry out 150 hours of unpaid work within one year.

Gordon Reid, site manager of Ape, said the incident was a one-off and that he was confident Blyth had learned his lesson.

He said: “Health and safety at Ape is paramount and we make sure every new member of staff knows the safety procedures.

“I also insist that whenever clients and staff are around the weapons they wear the safety masks.

“If they do not they can be sent home for the day without pay and if it is a serious incident they will not marshall for us again.

“This sort of incident has never happened before or since and I’m sure Calvin has learned a lesson he will never forget.”