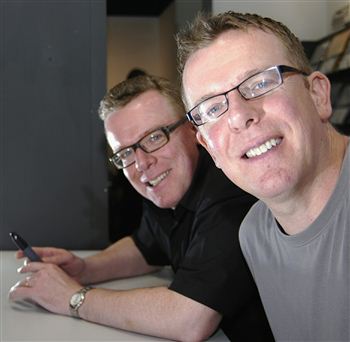 Famous Leither, and millionaire businessman, Sir Tom Farmer has also joined the battle to help beleagured shopkeepers as the tram works threatens to destroy their livelihoods.

The stars have all agreed to help out the businesses on the capital’s Leith Walk by appearing on huge ‘I Love Leith’ banners.

Images of Hibernian’s ‘Famous Five’ forward line and the Royal Yacht Britannia have also been put up along the historic port’s main shopping street.

The £10,000 campaign, led by the council and local business organisations, also feature grainy images of the ‘Foot o’ the Walk’, Leith Docks and Newhaven Harbour dating back to the 18th century.

And new, futuristic pictures of how the area will look when the trams start running are also depicted in the campaign.

The promotional images have gone on show to coincide with the arrival of a mock-up of a tram in the area and the staging of the Leith Festival next month.

An Edinburgh City Council spokesperson said: “To coincide with the tram mock-up moving down to Leith, street dressing has been produced to give something back to the Leith community and to make the area more attractive.

“There are 42 banners on lamp posts featuring 21 images in total of celebrating Leith people, places and transport past, present and future.

“We have also used the majority of the images to brighten up the windows of the old Woolworths building at the foot of the Walk.”

Thousands of copies of a free, glossy magazine promoting the Edinburgh suburb were distributed around the city three weeks ago.

Gordon Burgess, spokesman for the Leith Business Association, said: “This has been very much a joint initiative between ourselves and the council, and we’re delighted with the way the banners look.

“They really improve the whole look of the area and we hope they will draw people’s attention away from the roadworks in the area.

“Leith has had a lot of bad publicity over the last year or so because of the tramworks. This kind of thing is long overdue but is very welcome and we’re hoping we can keep the banners up for a good while.”

The ongoing tram works have come in for constant criticism after local business leaders complained of plummeting profits.

Tempers have been boiling since the work began, but council bosses hope the new campaign will help build bridges between the authorities and the shop owners.

Council leader Jenny Dawes said: “Leith is an area rich in character known for many famous people and places throughout the ages.

“The banners do a fantastic job, making Leith even more attractive and encouraging pride in the history of the community.”