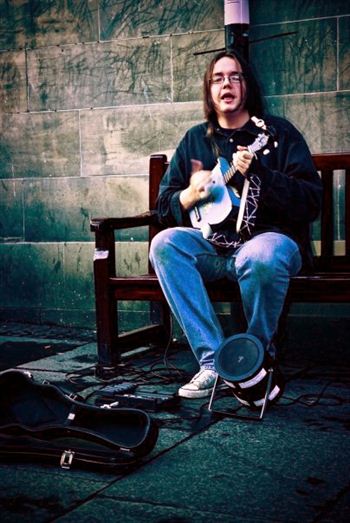 A SCOTS busker is all set to hit the big time after becoming an overnight internet sensation.

Stuart Crout, from Bonnyrigg, Midlothian, was asked to star in a Doritos advert after producers spotted a Youtube clip of him playing his homemade instrument.

The 20-year-old has created the world’s first ‘kazookeyele’ which he put together from an old, broken baby piano, half a ukulele and a kazoo.

The young busker has now received over 2.5 million views after posting a three minute clip of him playing Europe’s worldwide hit The Final Countdown on his unusual instrument.

The wacky Scot is now making a modest income from advertising revenue from the website and is currently creating more bizarre musical gadgets.

Stuart was left stunned earlier this year when he was suddenly asked to produce an advert for Canadian television to advertise Doritos crisps.

He said: “I did an advert for Doritos in Canada. They saw the kazookeyele clip and asked me to write a song for them.

“I didn’t get to fly over, but I shot a film and it appeared on three channels and is on YouTube.

“I used to busk with my ukele doing the Fringe as if I was playing at Wembley, when really there were four people watching.

“I admit that I look a right eejit.”

Since being commissioned for the Doritos ad Stuart has added more clips of him playing to the YouTube site, along with some of his self-written comedy sketches.

His internet appearances have sparked a loyal following and he is particularly popular in mainland Europe.

Stuart said: “After I posted the kazookeyele clip I slept for six hours and when I woke up it had 80,000 views.

“I seem to be rather large in Spain. I’m getting a lot of messages in Spanish and need to get friends to translate them.

“It has definitely encouraged me to put more up, and put my own work on YouTube.”

Following his success Stuart has decided to come up more ideas for unusual and unique instruments.

He said: “I’ve made a ping pong bat ukulele and I made a ukulele out of a tin of Quality Street.

“At the moment I’m making a banjo double bass but replacing the body of the bass with a kick drum to make a giant banjo.”