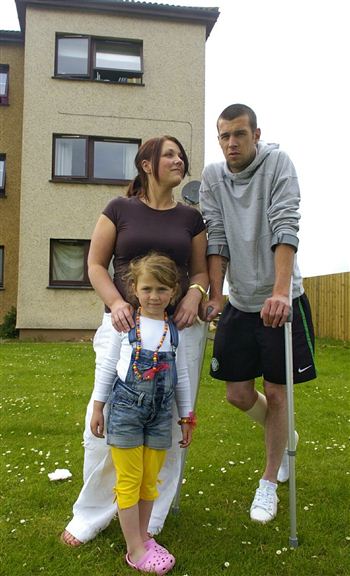 A BRAVE father was forced to drop his terrified four-year-old daughter 15 feet to safety because he believed his home was about to blow up.

Gareth Gray had to hurl his daughter McKenzie of his first floor living room window on Sunday evening after a blaze erupted in the flat below.

Mr Gray, 27, a window cleaner from Musselburgh, was forced to make a crash mat of sofa cushions before dropping the terrified tot to safety.

The hero dad then took the 15 foot plunge himself, but missed the cushions and landed on concrete badly damaging his ankle ligaments in the process.

Mr Gray revealed he was forced to drop little McKenzie because he feared a gas explosion would blow up the quiet residential block he lives in.

His partner, and McKenzie’s mum, Natalie McIntyre, 25, also made the jump to safety but escaped without injury.

Mr Gray said: “The neighbours were shouting up to us to get out of the house because the flat below us was on fire and they thought they could smell gas.

“We ran to the front door but the stairway was totally full of smoke so the only way out was through the living room window.

“As we made our way back into the living room, we heard an explosion below us and thought the whole building was going to go up, so my partner and I started throwing cushions out of the window to drop McKenzie on to.

“She was having a bit of a fit with the fear, and I told her that she would have to go out the window and she kept saying ‘No, daddy, no’.

“It had to be done though.

“There was every chance a gas explosion could have torn the building apart if we’d waited, so McKenzie went out of the window.”

After the dangerous drop McKenzie spotted her grandfather among the waiting crowd and ran over to him, but when Mr Gray made to run after her he collapsed in agony.

He said: “I must have landed in between the pillows and hit the ground. I thought I’d broken my leg but the hospital told me later that I had torn every ligament in my ankle.

“McKenzie was shouting for her daddy but I just couldn’t move.”

Fire chiefs believe that the blaze was started by a neighbour smoking in bed.

They say the “explosion” was most likely panes of glass shattering inside the ground-floor flat with the heat.

Witnesses claim they saw the downstairs’ occupant, thought to be man in his 50s, emerge from his home covered in black soot and had blood streaming from a leg injury.