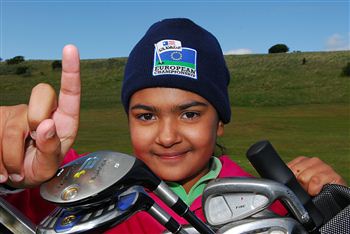 A TEN-year-old girl stunned onlookers when she hit a hole in one at a Scots golf course yesterday.

It was made all the more remarkable by the fact she had a strong swirling Scottish wind to contend with.

Her wonder drive put her firmly in the driving seat as she set the early pace in the first day of the US Kids Golf European Championship tournament in Gullane, East Lothian.

Competition organisers said Miss Atwal’s drive was up there with the best shots the course had ever seen.

The youngster’s hole-in-one sees her follow in the footsteps of the world’s golfing greats who also played on the Muirfield golf links, which hosted the Open Championship in 2002, won by South African Ernie Els.

Judging by her form yesterday, it won’t be long until little Miss Atwal is pocketing similar amounts to Els’ £700,000 prize money.

She flew into Scotland from India to compete in the US Kids Golf European Championship this week. 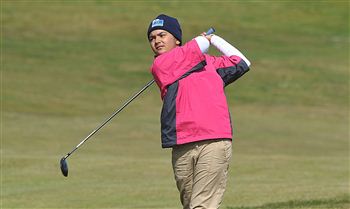 More than 400 competitors from 34 countries teed off across five of Scotland’s most historic courses this week.

If Miss Atwal continues her stellar form to scoop the title, she will be jetting off to the World Championships in Pinehurst, North Carolina, later this year.

“During this tournament we have seen a lot of great shots and impressive scores from some of the world’s best young golfers. The standard has been exceptionally high, but this is the only hole-in-one of the competition so far.

“I’m delighted for Seher Kaur and I am sure she is thrilled to have hit such a great shot. It was very windy out on the course when she hit her tee shot, so it really was a great piece of skill and a shot that many pros would have been happy with.

“A hole in one at the age of 10, and during the added pressure of it being a competition round, is a tremendous achievement that many of her competitors – and the spectators watching – would be jealous of.”