The plane with 28 passengers and six-crew aboard had been delayed from departing from Edinburgh bound for London City Airport for almost an hour.

But shortly after taking to the air the pilot reported hearing a “clunking” noise from the engine and abandoned the flight. 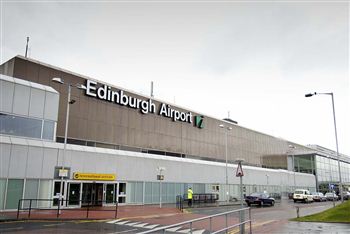 The stricken aircraft was forced to circle overhead having lifted off at 6.34pm – 49 minutes late – before landing safety at 7.30pm.

No reason was given for the delay.

Witnesses say a convoy of fire-trucks and ambulances were in attendance just hours after the airline confirmed the tragic loss of a larger aircraft to the Atlantic ocean with 228 souls north-east of Brazil.

Last night a spokeswoman for airport operators BAA said: “The crew reported a rough running engine and a full emergency was declared.”

“They reported a clunking type noise coming from the engine.

“The aircraft has now landed and a full investigation is underway. The passengers have disembarked and were taken to the terminal building.”

The aircraft involved in the incident was a Dornier 7328.

In the confusion BAA had initially stated the flight was inbound from City.

But the spokeswoman confirmed: “It was an Air France flight that had been outbound but was forced to turn back.

“It had to circle overhead for a time before landing.”

She added: “The passengers have now all been allocated seats on flights operated by Air France and BMI to Heathrow and transport will be laid on to take anyone to London City who needs it.”

None refused to board the replacement flights and no-one was injured, she said.

She said three were staying in Edinburgh overnight “because it suited their travel arrangements”, 20 were flying to London with BMI and 11 on another Air France flight tonight.

Lothian & Borders Fire & Rescue Service declared the incident “a full emergency “ and confirmed its crews had been on stand-by.

Lothian & Borders Police had also shut off parts of Glasgow Road to aid the arrival of the emergency vehicles.

Only last week BA announced it was cutting 25 jobs on the City to Edinburgh route.

It said it had “surplus” staff after one of its planes was written off on landing at the London airport.