A TINY Jack Russell dog has been hailed a hero after saving his owner from a fire – by biting him on the nose.

John Crossan, 43, dozed off while cooking up a late night snack and his gas hob burst into flames.

Luckily his feisty little pet dog, Jack, sniffed out the smoke and woke his owner.

With his home engulfed in flames, John scooped up his dog and managed to feel his way outside to safety. 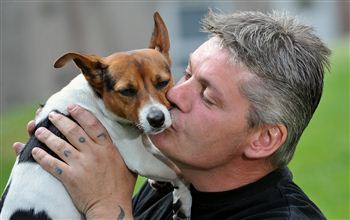 A relieved John says he owes his life to his 14-month old pooch, who he describes as his “best friend.”

He said: “Jack deserves a big bone as a treat for saving me – I’d be a goner without him.

“I had taken the batteries out the fire alarm earlier in the day when I was painting the ceiling, and stupidly forgot to put them back in.

“Luckily the dog has been my four-legged fire alarm and woken me up.

“He nipped me on the nose and I wok with a start.

“The flames were absolutely jumping out of the kitchen and the whole place is wrecked because of the smoke.

“I’m just lucky to be alive thanks to this wee guy.”

And the fire crew who helped John escape the inferno described little Jack as “a wee hero.”

John only decided to get a pet after his partner Michelle Paton, 36, died at New Year.

He said: “I needed some company after Michelle passed away, and one day I was walking in the park and Jack came running up to me.

“I said to his owner “that’s a lovely wee dog” and she asked if I wanted to keep him, because her children were becoming a handful.

“I never thought he would end up saving my life.

“It has become a very long wait to find out what killed Michelle, so I valued the dog’s company a lot, but now he’s my best friend.”

John fears the damage from the blaze will force him to move out of his Dumbiedykes Road flat.

He added: “I’ve got some very emotional memories related to his house and will be really sad to leave.

“The place is ruined, so I think Jack and I will have to find somewhere else.” 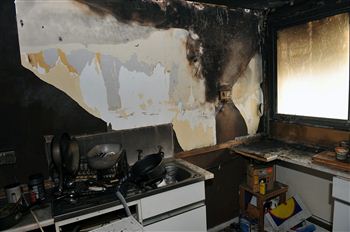 He said: “We sent four crews there and they needed breathing apparatus as they entered the flat, due to the intensity of the fire and smoke.

“Luckily, the dog as been the wee hero and woken John before it was too late.

“We know all too well that it is the smoke that can often prove fatal, so we would remind everybody to check their smoke alarms once a week by pressing the test button.

“As John now knows all too well, he’s been very fortunate to escape without a working smoke alarm.”