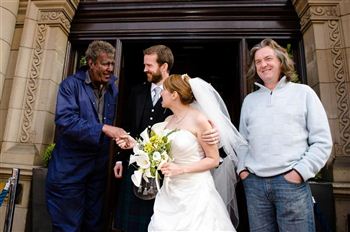 The petrol head presenter of BBC’s hit show Top Gear will be officially unveiled today (Tues) as one of the keynote speakers.

He is expected to be joined by executive producer Andy Wilman to discuss just why Top Gear remains the highest rating programme on BBC 2.

They are also expected to talk about a recent stunt where F1 legend Michael Schumacher was jokingly unveiled as the mystery ‘Stig’ test driver.

The hoax earlier this month saw 7.1million viewers tune into the hour-long show – just  53 per cent of them men – such is its universal appeal.
A date for the August slot will be revealed today (Tues).

Top Gear – which describes itself as the world’s greatest car show – is presented by Clarkson, Richard Hammond and James May.

Hammond almost died in a crash while driving a 300mph jet-powered dragster at Elvington airfield near York in September 2006.

Clarkson and May were in Edinburgh filming recently and ended up gate-crashing the wedding of an Edinburgh lawyer.

The presenters turned up at mark and Angela McCole’s reception at the city’s plush Balmoral Hotel.

Clarkson was covered in soot and wearing a blue boiler suit and took time out to congratulate the couple.

They had been filming a three-way race between a steam engine, 1940’s Jaguar car and 1957 Vincent motorbike for the latest series.

Angela said at the time: “They were really nice and chatty. It was the icing on the cake, my husband even managed to mention it in his speech.”