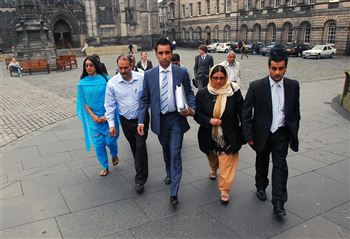 Mohammed Atif Siddique, 23, was “mainstreamed” by prison bosses ahead of his appeal hearing which began yesterday (Tues) at the High Court in Edinburgh.

The former Clackmannanshire computing student was jailed for eight years in 2007 for a string of offences linked to material he had downloaded from the internet.

He had been housed alongside some of Scotland’s most dangerous criminals in the specialist segregation unit, dubbed “the Wendy House” by inmates after former Labour leader Wendy Alexander.

Previous cons in the tough prison wing include murderer Hugh Collins, who spent 14 months, and shamed boxer Scott Harrison who was segregated for his own safety.
The move will see Siddique left alone during lock-downs and nights, a far cry from the intense 24-hour close scrutiny of the segregation unit.

But prison bosses refused to comment on why the man, described by the Crown as “a wannabe suicide bomber” during his trial, has been removed. 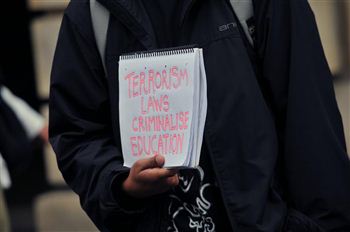 A spokesperson for the Scottish Prison Service said: “We can move people in an out of the segregation unit for a number of reasons.

“But we won’t comment on individual cases or operational matters.”

The shopkeeper’s son is said to be “full of hope” about getting freed from Barlinnie.

A friend close to Siddique said: “He’s bearing up okay in Bar-L, trying to keep himself to himself and out of trouble.

“He’s got a lot more freedom since he got shifted from the high security cells to be alongside the mainstream criminals.

“Safe to say he’s pretty anxious about the appeal. He just wants to be home with his family as soon as possible.

“He is surprisingly positive about how he thinks the appeal will go, and says he still believes in justice prevailing.”

His defence lawyer Aamer Anwar spoke outside the High Court in Edinburgh ahead of the appeal hearing.

He said: “Mohammed Atif Siddique has asked me to say on his behalf that since 2006 he had maintained his innocence.

“It has been three long hard years for him and his family, however he is still full of hope and believes in justice.

The hearing is expected to be concluded on Friday, with a decision within six months.