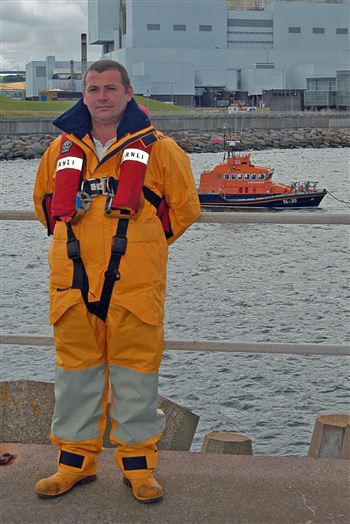 A HEROIC lifeboat skipper is to be awarded a bravery medal for saving a yachting couple’s lives – over 100 years after his great-grandfather was presented with a similar honour.

Coxswain Gary Fairbairn, from Dunbar, East Lothian, is to be presented with the Bronze medal for Gallantry by the Royal National Lifeboat Institution after he helped rescue a Swedish husband and wife team during storms which reached Force 9.

Mr Fairbairn’s vessel was damaged as it was twice knocked onto its side as he struggled to maintain control of the boat during the courageous rescue.

It took the lifeboat crew three approaches to reach the terrified couple, but after the lifeboat was hit by a huge wave the crew managed to drag the pair aboard the rescue craft.

And Coxwain Fairbairn’s five-strong crew are all to be awarded with the Medal Service Certificates for the vital contribution they made to the lifesaving rescue.

It has now emerged Mr Fairbairn’s great-grandfather, Walter Fairbairn, was also presented with a Silver bravery gong in 1905 after he helped save the lives of 40 men in a seagoing yacht that had run adrift.

The present day daring rescue mission began around 5pm on 15 May when the Forth Coastguard received a mayday message from the stricken 8-metre Swedish yacht Ouhm.

The Dunbar RNLI lifeboat hit the seas soon after and began heading into a gale force 8 storm with waves reaching up to seven metres.

The yacht was reported to have suffered two knockdowns and the skipper – who took five years building the craft himself – was finding it difficult to cope with the extreme weather conditions.

As the weather worsened – conditions reached severe gale force 9 – the lifeboat fell 10 metres from the top of a large wave. Soon afterwards she was hit on her starboard side by a huge breaking wave, causing her to turn over onto her side and putting the port side wheelhouse windows underwater.

The self-righting lifeboat swiftly returned to its upright position allowing the brave crew to continue their passage towards the stricken yacht.

Coxswain Fairbairn managed to negotiate 10 metre waves and after several attempts affected a rescue of the stranded couple.

The following day the RNLI Arbroath lifeboat was called out to a yacht that was drifting without power, and the yacht was successfully brought back to shore and reunited with its owners. 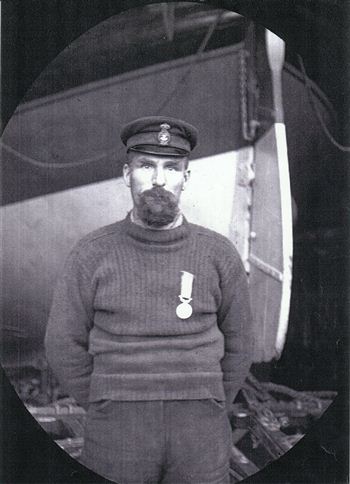 It’s all about teamwork

Mr Fairbairn said: “I am really honoured to be awarded the Bronze medal because it’s only the sixth medal, and the first in over 30 years, to be awarded to a crew member from Dunbar. It was a proud moment when I was told.

“My hat, though, goes out to my crew members who were amazingly brave that day. In all my 30 years of being on the seas I’ve never encountered conditions like that. It’s all about teamwork and my team was immense that day.

“They deserve their honour just as much as I do.

“The couple were extremely traumatised by the time we got to them and, to be honest, if they had stayed on board their yacht all night they would not have made it. The sea conditions were incredibly ferocious that day.

“I come from a long line of lifeboat volunteers, and I feel honoured to follow in my great-grandfather’s footsteps in being awarded this medal.”

Wave Crookes, RNLI Divisional Inspector for Scotland, said: “The RNLI charity is proud to recognise this service which was carried out in the finest traditions of the Institution.

“Ouhm had already suffered two full knockdowns before the lifeboat arrived and I know the crew felt the couples lives were in grave danger. The woman said she felt she was already saved when she saw the RNLI lifeboat arrive alongside and the crew reaching down to pull her onboard.

“The coxswain demonstrated exemplary leadership and the whole crew showed extreme courage throughout the service.

“The conditions during the passage to the casualty were extreme but at no stage did the crew consider giving up, even when the lifeboat sustained damage and equipment broke loose.

“Coxswain Fairbairn’s boat handling was exemplary and neither the lifeboat nor the casualty suffered any damage while the casualties were evacuated.”