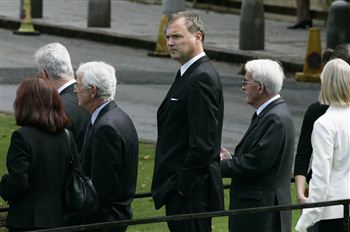 ONE of the most iconic voices in Scottish broadcasting was laid to rest yesterday after a lively and upbeat funeral.

Steve Hamilton was the voice of the Wheel of Fortune and was an announcer and news reader on Scottish radio and television for decades.

For years Steve worked alongside TV stars such as John Leslie – who attended the funeral and Nicky Campbell – both of whom presented the hit show.Leslie was among the mourners yesterday, and was seen in tears at one point at the loss of his showbiz chum.

After TV fame Steve worked on commercials and voice coaching in a long, successful career.

He had many fans and was well respected by his peers for his wit and fresh style.

Tony Currie, transmission director and continuity announcer for BBC, worked with Steve for more than 10 years in television.

He said: “Steve Hamilton was already an established DJ at Radio Forth, and when he came to STV the old guard of announcers were gradually being replaced by younger ones like us.

“At STV his style tongue-in-cheek style was new – and everyone loved it.

“He didn’t take anybody or anything seriously and that was part of his appeal – Steve was always a hoot on screen.

“And he used to introduce films he didn’t like in a less than flattering manner – but the viewers loved it.”

“He was also always impeccably dressed – from the waist down.

“He would never bother to buy a complete suit, most nights he would just turn up in a jacket and waistcoat and jeans instead of trousers.

“He would say ‘no point in wasting money dear boy’ – I and everyone else was dear boy to him.”

More than 100 people attended his funeral at Mortonhall crematorium in Edinburgh.

It was an upbeat humanist “celebration of life” and Steve’s coffin was brought in to the sounds of ‘Take a walk on the wild side’ by Lou Reed and ‘Come to the Cabaret’ by Lisa Minelli.

Tony added: “He always read the news very solemnly – but everything else he did with wit.