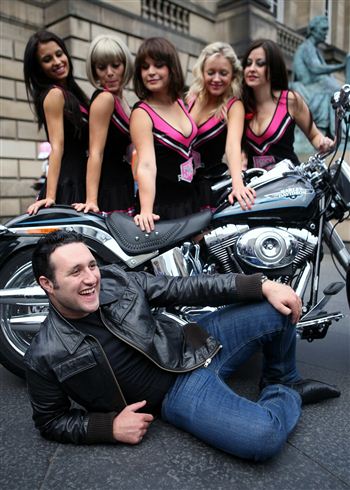 BOYBAND favourite Antony Costa and the creator of Holby City have teamed up for a festival musical – with a ripping twist.

“Bloodbath”, which stars the former Blue singer as a high school heartthrob, features a Psycho-style serial killer stalking teenagers in a US town.

The killer, dubbed “The Waterman”, preys on unsuspecting teens, picking them off one-by-one – but only if they are in the water.

Costa – who has enjoyed a series of musical roles since his departure from Blue – surprised festival-goers in Edinburgh yesterday (Monday) with a surprise appearance on the Capital’s Royal Mile to promote the gruesome show.

Flanked by a gaggle of beauties, the star showed off his 1950s quiff while sitting on a Harley Davidson.

This is the first time the singer has worked with Holby City creator Tony McHale, who has also recruited former Hollyoaks temptress Ciara Janson for the slasher-musical.