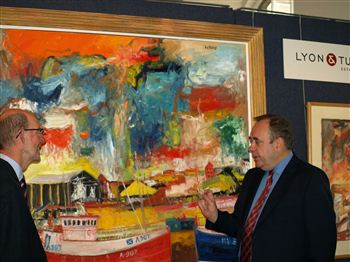 A PAINTING used by the First Minister as a Christmas card to celebrate the Year of Homecoming is to go up for auction to raise cash for four Scottish charities.

Entitled ‘The Homecoming’, the painting of Macduff harbour was donated for this year’s celebrations by world famous Scots artist John Bellany.

The painting by the Port Seton-born artist is expected to reach between £5,000 and £7,000 when it goes under the hammer at Lyon and Turnbull auction house in Edinburgh next Wednesday.

Benefitting from the sale will be the Aberdeen Cyrenians, Islamic Relief, the Scottish Catholic International Aid Fund and the Royal National Lifeboat Institution.

“The painting has been on display at Duff House and the Dean Gallery this year and now someone can be lucky enough to own this beautiful image.

“I’m sure there will be considerable interest in this work and I look forward to seeing how much we can raise to assist Cyrenians, SCIAF, the RNLI and Islamic Relief in the vital work they undertake to help others.” 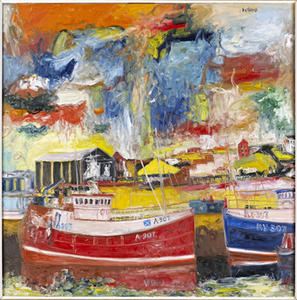 Paul Hannan, Chief Executive of Aberdeen Cyrenians, said: “We really hope that a good price is got for the picture as the more that is raised then the more we will be able to meet the basic needs of local homeless people who are amongst the most vulnerable in our society.

And Isla Dewar, Fundraising Manager for the RNLI, said: “We are very grateful to the First Minister for choosing us as one of the four charities to benefit from the sale of this painting.

“The painting is a vibrant piece of work and I hope who ever buys it gains further enjoyment from the fact they have helped us continue to save lives at sea.”

Bellany, 67, was born in the East Lothian fishing village of Port Seton, and was bestowed with the honour of being the first ever Freeman of East Lothian in 2005.

Described as one of the most influential Scottish painters since the war, Bellany was born into a family of fishermen and boat-builders in 1942. His coastal upbringing is instrumental within much of his early work.

Bellany paintings hang in some of the most prestigious art galleries in the world including the National Gallery of Scotland, The Tate Gallery, The V & A and the Modern Art and Metropolitan Museums in New York.

On his painting, Mr Bellany said: “The Homecoming is a sacred moment. After a voyage, whether long or short, families will be joined by the bread winner again or they can simply be the wonder of selling the catch of fish which they have managed to make in one of the seas and oceans of the world.

“The pain of waiting for their return is so deep and elemental and has continued to be thus throughout centuries of toil.” 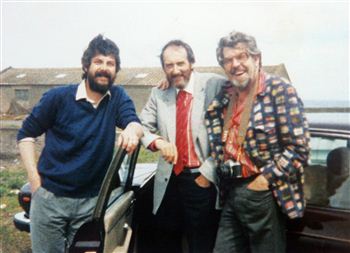 The celebrated Scot’s work has been the subject of numerous awards and major international exhibitions, including being given the honour of holding the first ever one-man show at the National Portrait Gallery in London in 1986.

He has lectured at various top British art schools, including the Royal College of Art, and was awarded the CBE by the Queen in 1994.

After a bout of ill health in the 1980’s, which resulted in a liver transplant, Bellany relocated to the Tuscan town of Barga, although he still has homes in Edinburgh and Essex.

The artists move abroad is widely seen as responsible for the dramatic change in style which is now believed to show a renewed optimism.