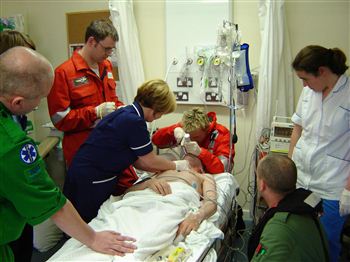 A SENIOR medic is warning of a dramatic shortage in doctors working on specialist children’s wards after a mini baby boom wiped out a quarter of junior staff.

A worrying report claims that 23 per cent of UKs junior doctors specialising in paediatrics are off on maternity leave leaving hard pressed colleagues to cope.

Dr Padfield is warning the service is under “particular pressure” and fears staff could be working more hours than those agreed under new EU legislation.

In a report to the health board, he said: “Rotas for paediatric trainees across the region have consistently fallen short.

“This shortfall has been distributed across the region to enable services to continue – at the cost of trainees working considerably over their usual hours by filling gaps at nights and weekends.

“There is a shortage of paediatric trainees across the UK, exacerbated by advance trainees rotating out of their normal programme to get specialist experience available only in specialist paediatric teaching hospitals, and by a level of maternity leave currently running at almost 23 per cent of the trainee cohort.”

He said he is worried that the extra hours will mean trainees will be doing more hours than agreed under the European Working Time Directive, which states that hospital staff cannot work more than 48 hours a week.

“A load of women don’t just fall pregnant at once”

He added: “They may not even be compliant without finding additional people.

“There are particular pressures in St John’s (in Livingston) where a sufficient number of paediatric trainees are needed to provide the out-of-hours cover.”

Patient groups have said that the NHS should have seen this coming and planned for it.

Margaret Watt, chairwoman of the Scotland Patients Association said: “It’s not difficult to make contingency plans, a load of women don’t just fall pregnant at once and leave.

“You know many months in advance of someone going off on maternity leave. There have been shortages in this area for a long time and what’s needed is some forward planning.”

But others claim that the maternity leave rate in Lothians is the same as the rest of the UK, and has remained static for the past few years.

Alan Robertson, chairman of the British Medical Association’s junior doctors committee said: “The age range covered is likely to be from the mid-20s to mid-30s, which is obviously an age where women would be likely to give birth.

“The NHS workforce as a whole is changing and we have to adapt to cope with issues such as this.”

But NHS Lothian said they were bringing in other resources to deal with the shortage as part of a larger long-term plan.

“Doctors in training are obviously part of this team but one aspect of the national Modernising Medical Careers process is about ending the old culture where junior doctors were expected to shoulder a great deal of responsibility with little protected time for learning.

“Like many other health organisations, NHS Lothian has been putting plans in place over the last three years to deal with the long-predicted shortage in the availability of doctors in training which is anticipated to cause issues for all hospitals in the UK in the near future.

“While we’ve been working with the Scottish Government on national initiatives to deal with this shortage, we’ve also been looking at whether some roles or jobs require doctors or whether they could be done safely by other staff with the appropriate support and training.

“We are continuing with this work in the area of paediatrics but no new arrangements will be introduced without a thorough process to ensure public safety.”