NEW evidence has been unearthed which hints at undiscovered treasure in an iconic Scottish church. 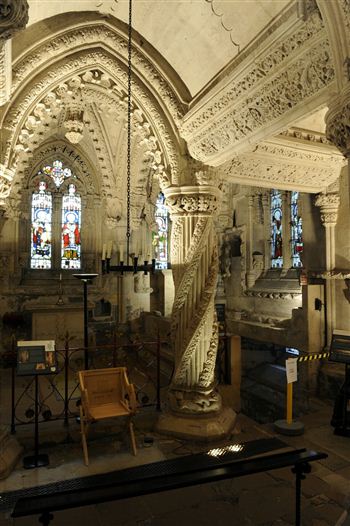 The 15th century church has been the subject of speculation over its hidden secrets since the publication of the Da Vinci Code, and some believe the chapel even hides the famous Holy Grail.

And in his book “The Rosslyn Templar”, 36-year-old author Cowie has noticed a detail in a painting from 1836 that could lead to more answers.

The pastel painting of a Templar Knight inside the church features a hidden stairwell which is missing from the modern chapel.

The Wick-born symbologist said: “The book systematically examines the carved symbols and designs that some authors point to evidence of Templar symbology within the chapel and reveals them to be common symbols in everyday Christianity.

“While a lot of the Templar symbols in the painting don’t tie up with features within Rosslyn Chapel, the most interesting feature is the stairwell that also doesn’t exist there today.

“It is possible that this stairwell is also the product of artistic license.

“However there is a growing amount of scientific evidence from excavations and scans which seems to point to the existence of these chambers, so there is every possibility that this stairwell did exist and that it was once the entrance to the chambers.”

Although Cowie lacks any qualifications in archaeology or symbology, he has decades of experience hunting for the truth behind Scottish legends and symbols.

A recognised figure on the science festival lecturing circuit, Cowie is also a Knight Officer in the modern Order of the Scottish Knights Templar.

He added: “It would be fair to call me a reformed grail fanatic, but if my research does lead to the discovery of a hidden chamber containing the Holy Grail or a hoard of Templar treasure, I will be claiming finder’s rights.

“The first thing I’ll buy is a fedora hat and a bull-whip, because these things belong to the realms of fiction or what I call the ‘loony fringe’ or Rosslyn research.

Is this Scotland’s most heavenly home? Former Victorian gothic church on sale for £650k

REVIEW – Pure magic as Vuelos reach for the skies