Police warn child sex beast could be on loose in Edinburgh

A SEX beast described by a judge as being “an addictive paedophile” could be on the loose in Scotland.

Lothian and Borders Police issued an alert today (wed) that James Warke may have travelled to Edinburgh following intelligence passed onto them by detectives at  Greater Manchester.

Warke, 47, has a vile record spanning more than two decades of abusing young boys and vulnerable adults, including the abduction of a 12-year-old boy that finally saw him jailed.

He preyed on vulnerable men and impressionable children, particularly those who had fallen out with their parents.

Now it is feared he may have taken a bus or a train north to Edinburgh after failing to check in at Rochadale Police Station last Friday.

Police also want to interview him over an alleged sex attack on a 20-year-old man last Saturday.

Sources at Greater Manchester Police say they had been tipped off that Warke was in Edinburgh – but said they could not confirm the claim.

It was thought he may have been seen boarding a bus to the Scottish capital.

Lothian and Borders Police said they had received information that Warke had landed on their patch “in the last few days”. And they warned that members of the public should not approach him.

A spokesman said: “We are fully aware of the circumstances of this and are working closely with Greater Manchester Police.”

In 1999 Warke was jailed for 10 years at Preston Crown Court for sex crimes against young boys.

At the time he was described by Judge Peter Openshawe of being “an addictive and obsessive paedophile”.

During his trial Warke, of Blackburn, Lancashire, pleaded guilty to abducting the 12 year old boy at a 10 -day hearing at Carlisle Crown Court.

Originally from Northern Ireland, the court heard he had a vile 21-year history of similar offences against young boys.

After moving to Blackburn he abused boys he had befriended, but caught after a local who spotted his face in the paper called police six days after he disappeared with his victim.

Judge Openshaw told the paedophile: “It is quite clear to me that you deliberately sought out their company and attracted them to your flat with sweets, drinks, and offering to play games with them without their parents’ knowledge and consent to satisfy your sexual obsession with young boys.”

Detective Inspector Debbie Conlon Houldershaw from Greater Manchester Police’s Sex Offender Management Unit said: “Warke has a history of being a risk to children and vulnerable adults and we are keen to find out where he is so he can be properly monitored and avoid anyone being put in danger.

“Since he went missing, my officers have been carrying out extensive inquiries to trace Warke but we also need the public’s help.

“If anyone has any information about where he is they should contact police at the earliest opportunity, we do not want people to take the law into their own hands and would urge people not to approach him.”

The 15-year-old, who turns next Tuesday, hasn’t been seen he disappeared from his home at Ratho on the outskirts of Edinburgh after a bust-up with his mother Karen after he came home at 5.30am one morning after a night out.

He was last spotted on CCTV cameras getting off an X48 bus on South Bridge in Edinburgh on his way to school around 12.15pm two weeks ago tomorrow (thurs).

It was thought he walked along the Royal Mile and down South Gray’s Close towards the Cowgate. 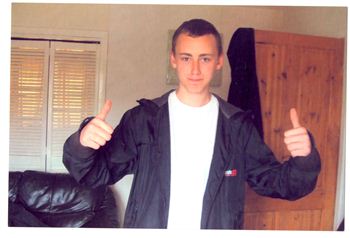 Jason was described as being 6ft tall, off thin build, short brown hair, and blue eyes. He was last seen wearing a dark jumper, blue jeans, and dark Nike trainers with a gold symbol

Lothian and Border Police said they had “significant concerns” over his safety because of the length of time he had been missing.

There was no suggestion that either appeal was in any way linked.