Former Mis-Teeq star and Strictly winner Alesha will be featured on billboards and adverts around the country, with her face pictured next to a cat’s.

She is joined by ITV chat show host Paul O’Grady and comedian Johnny Vegas for the ad campaign by Edinburgh based charity Advocates for Animals to promote the idea that animals have similar feelings to humans.

“I love all animals”

The 31-year-old beauty: “I am delighted to support Advocates for Animals’ new OneKind campaign – I love all animals.

“Anyone who, like me has dogs or other pets, knows without question that animals have thoughts and feelings.”

The ad campaign, which will appears in newspapers over October and November, is to promote the well-being of wild animals and pets.

It is in response to a recent survey, that showed 91 per cent of Scots believe that animals have similar feelings to humans. 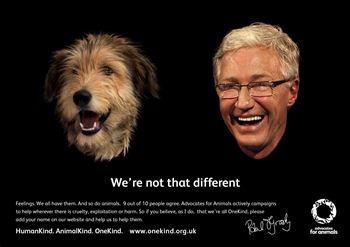 BBC Three comedy writer and actor Johnny Vegas – known for his grizzly complexion – has no problem fitting in next to a fearsome grizzly bear.

He said: “Animals are amazing. I’m certainly one of the 9 out of 10 people who believe animals can feel – it seems so obvious.

“We can all make a difference to how we treat the other animals with which we share this planet.

“Advocates for Animals’ new OneKind campaign is a great way to get involved. I hope loads of people check out OneKind at www.onekind.org and show their support.”

And chat show favourite Paul O’Grady is lending his image to the campaign to ensure that dogs aren’t the victims of any ruff treatment.

Paul O’Grady, who keeps a whole family of farmyard animals, said: “As an animal lover I am fully behind the new OneKind campaign. 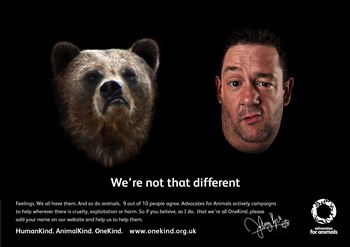 “My dogs, pigs, lambs and goats are all real characters with their own unique personalities.

“I hope OneKind is successful in raising people’s awareness that animals are sensitive creatures who deserve our respect.”

Advocates for Animals’ CEO, Fiona Ogg, said: “It’s time we recognise the fact that animals think and feel and change the way we live alongside them. Animal suffering is nearly always avoidable if there is the will to stop it.”