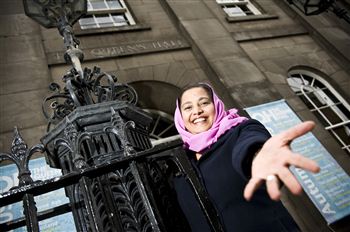 A GROUP of mad medics are claiming to have come up with the solution to depression – “prescribing” a comedy DVDs to patients.

Health professionals in Edinburgh have organised a comedy gig – starring top comic Patrick Monahan – that will be filmed and distributed across to hundreds of GP surgeries.

The bizarre scheme, which is being organised by the Centre of Health and Wellbeing, is hoping to reduce the amount of anti-depressants being issued in Scotland – in favour of comedy DVDs.

Dr Lubna Kerr, a pharmacist and director of the charity group, said that comedy is the perfect alternative to anti-depressants.

She said: “The Scottish Government is very keen to reduce the number of anti-depressants being prescribed.“I would like to give the DVDs to GPs and practice nurses so they can give them to patients with depression.

“I also want to run workshops for people with depression and measure their level of the stress hormone, cortisol.

“Then show them the DVD and measure it again after to see what impact watching two and a half hours of comedy has on stress levels.

“We know laughter is the best medicine, we just have to prove it.”

As well as the patients being tested, a section of the audience at The Laughter Show – which will also feature Scottish Comedian of the Year john Gavin and previous winner Scott Agnew – will also be tested to see if their stress levels are lower.

Billy Watson, chief executive of the mental health charity SAMH, said: “We welcome the Centre of Health and Wellbeing’s approach of using comedy to help ease the symptoms of depression and believes that laughter can have a positive impact on a person’s mental health.”

The Laughter Show will take place at the Queen’s Hall in Edinburgh on 14 November.