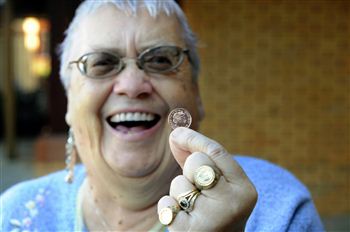 AN elderly grandmother was left bewildered when she received a tax demand from her local council – for a single penny.

Doris Nelson said she was gobsmacked by the bizarre bill, which was one of a string a demands from Edinburgh City Council.

The 73-year-old had received a number of letters before moving further down the street she has lived on for 20 years.

She received the final one at her new home in the city’s Royston area, and decided to sort out the penny dispute once and for all.

She said: “I couldn’t believe it. I know these letters are probably churned out by a computer, but how much does it cost to send me this and how many more like this are being sent out at time when the council is trying to make efficiency savings?“I was getting them all the time – it got to the stage where I didn’t want to open them anymore.

“At one point I was told I was in arrears and then the council ended up owing me money.

“When I phoned about this letter, I asked the man on the phone what to do.

“I told him I owed the council a penny and asked how I should pay it.

“I asked whether it was best to come in a taxi or pay by cheque.

“He started laughing and told me to forget about it in the end.”

Susie Squire, political director of The Taxpayers’ Alliance, said that the incident was “absurd”, adding that she had never heard of anyone chased for such a tiny amount.

“I am sure there was no bad intention here, but there should be more checking to prevent such waste in the future.”

Green Councillor Alison Johnstone – who herself received a recorded delivery letter from an office on the same corridor as hers – said Doris’ bill was another example of council waste.

She said: “This does not make the council look very compassionate or efficient.

“It’s concerning if we are worrying citizens who have made an effort to make sure they are up to date with payments.

“It’s about being sensible. Perhaps it’s time the council adopted a policy whereby if it is costing more to send out a letter than we’re getting back, maybe the amount should be written off.”

The council’s finance convenor, Phil Wheeler, said he could not comment on Doris’s case, adding: “In these challenging financial times, ensuring that the council communicates in the most efficient manner with people in Edinburgh is a top priority.

“There are plans to move to providing an e-billing option to further help reduce postage and reduce our use of paper.”