Accompanied by son Paul, Sir Jackie was promoting dyslexia courses for prisoners, which he says will put them in pole position to turn the corner once outside.

70-year-old Sir Jackie is one of the most high-profile figures in the UK to suffer from dyslexia, and has campaigned tirelessly to raise awareness of the condition.

Famously, he has said that his dyslexia was so bad that it left him unable to fill in a drivers’ license form.

The three-times Formula One World Championship winner said: “Our trip to prison was very interesting.”

“I had received two letters from prisoners in there who were concerned about their lack of ability to read and write correctly.

“They were also worried that the education they were getting to help them with that was going to be stopped.

“One chap was in for life, and another had been in for twenty years of his life and he’s only 36 now.

“So it’s a bad story, and clearly they’ve done something that is not correct.

“But if we are going to help them to rebuild their lives when they come back out of prison, and become good citizens in the community, then they’ve got a chance of getting a job – if they can read and write.

“For example, as a dyslexic, I have no ability to even fill in a drivers’ license form – I just can’t do it.”

“Nowadays you need to fill out a form to get any job, and these prisoners are learning to do that and are progressing very well.”

He added: “Kenny MacAskill, Minister of Justice in Scotland, came along.

“He was instrumental in helping us try to change around the circumstances around this course that the prisoners are concerned about.

“He added a great dimension to our trip, and I’m hopeful that we’ll be successful.”

The ever-active Sir Jackie has also found the time to promote a charity single – written by his son Paul.

The single, called “Fly Free”, was initially a present from Paul to his dad on his 70th birthday, and even features Eric Clapton on lead guitar.

Sir Jackie’s younger son Mark produced the accompanying music video, which the two sons presented to their dad on the night of his 70th birthday.

But the Scottish speedster liked the song so much that he decided to promote it as a charity single and video, with the production costs underwritten by Walkers Shortbread. 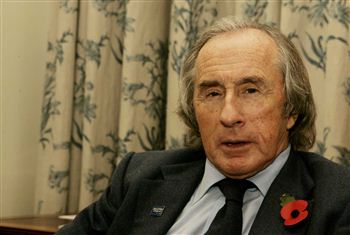 The lyrics look back on Sir Jackie as a sportsperson and family man, and he described the gift as a “unique present”.

He said: “I had my 70th birthday this year and Paul decided he was going to give me a unique present.

“He wrote some music for me, doing the lyrics and the music, and then he sang it himself over the top of that.

“I think it’s going to go global, because of the worldwide audience that Formula One has – more than 2.2 billion people a year.

“The video shows my life as a racing driver and as a family man, so it’s come together beautifully I think.”

Cash raised by the single, which is for sale on iTunes for 79p, will go towards the Mechanics Charitable Trust, which looks after former Formula One mechanics who are in ill health, and their families.

44-year-old Paul Stewart, who survived a bout with colon cancer in 2000, said that the song was a “nice little story”.

He said: “I was having lunch with a couple of friends – including Eric Clapton – when I mentioned that I was planning a surprise birthday for my father.

“Someone suggested doing a song, with Eric, and then the gauntlet was laid down – I had to do it.

“I’d never done this before, but thought it would be a fun thing to do. It’s just a nice little story, and hopefully some people will like it.”

Sir Jackie also shared his thoughts on the future of Formula One, following Toyota’s decision to pull out of the championship.

He said: “Motor racing will still be strong and will go on, because of the dominance of the motor vehicle as a way of transporting people and goods.

“Also it’s a great gymnasium for engineering talent for the motor industry.

“I have no fear though – 2.2 billion people a year watch it, and that’s a big pool, so I think we’ll see prosperity in the sport.

He added: “I still feel I have a lot to achieve – you seek new challenges all your life.

“I’m working as hard as I’ve ever worked and am enjoying it, with no intentions to retire at the moment.”

The Rise in Watch Sponsorship Deals in Formula 1