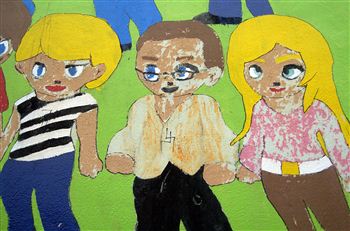 SICKENING Nazi symbols have tarnished a community mural painted by children on the day that as Scotland remembers its war dead.

Swastikas and Hitler moustaches have been scrawled over the pictures painted on the wall of a community centre in Edinburgh.

Local residents and kids spent a month painting the mural, which depicts children with different skin colours playing, only to find that it had been defaced with shocking Nazi imagery.

George White, 46, chairman of the community centre’s committee, said the tarnished mural was deeply unsettling to everyone.

Speaking yesterday, he said: “The whole community is totally horrified – this is a school playground and the kids are asking questions.“You try to explain to them that somebody has defaced something that they have done, which is quite hard.

“It comes at a particularly bad time with it being Armistice Day today.

“The mural was really good the kids used to play football against the wall and there were ball marks on it, so we decided to do something with it.

“The people in the crowd are some of the centre’s volunteers, staff members and people who worked on the summer programme.

“Due to the ongoing police investigation we haven’t been able to remove the graffiti.

“We have a pensioner’s group that meets at the community centre and some of the members had husbands in the war – and they were horrified.”

Edinburgh City Council said that the mural, which is believed to have been defaced last Thursday, would need to be completely painted over, at a cost of several hundred pounds.

“I know that the mural was created through a big effort from local children and centre staff and everyone is bitterly disappointed it has been ruined in this way.

“We will continue to support police as they work to prosecute whoever is responsible.”

Lothian and Borders Police said that a 54-year-old man has been charged in connection with the incident and will appear in court at a later date.