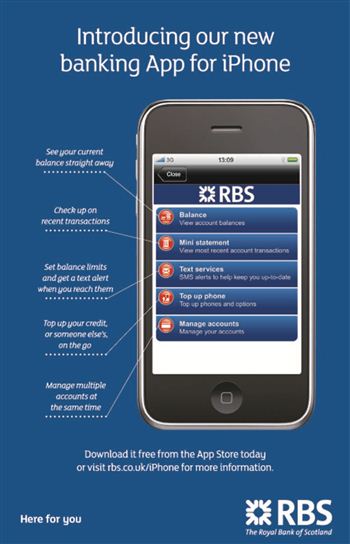 WORRIED that beleaguered RBS bankers might lose your money and go cap in hand looking for another taxpayer funded government bail out?

Well now there’s an App for that.

Part state-owned RBS has now launched an iPhone App to allow customers to keep an eye on their finances – just months after announcing the biggest banking loss in British history.

The bank – which was once the wealthiest in the world by assets – is encouraging its customers to keep organise their own finances – after laying off a further 3,700 of its own staff.

The Mobile Banking App will allow customers to check their balance, move cash between accounts and set a balance limit on the account – to ensure that you don’t splash your cash.Last week RBS – in which the Government has a majority stake – announced that 3,700 more jobs would go.

That means that around 16,000 staff have left the bank this year alone.

Tim France-Massey, Head of RBS Mobile Team, said: “In the current climate, RBS is more committed than ever to delivering innovative solutions to help customers connect with their finances.

“Mobile phones are becoming an increasingly popular means of money management, and the iPhone provides us with a really cutting edge technology platform to support our customers’ needs.”

RBS say that a survey they carried out showed that a quarter of customers would like to transfer money between accounts on their mobile, with a further quarter being interested in receiving fraud alerts.

They added that 24 per cent said they would like to pay cash in without visiting a branch.

There had been fears that mobile accounts could be accessed if the iPhone was stolen, or hacked into remotely.

However RBS say that all details are password protected, and that the bank details are linked to the individual’s phone number, preventing remote hacking.

So far the App can be downloaded for free.

Apple say they now host more than 100,000 different apps for their iPhone with more than a billion downloads in just nine months.