THE PITFALLS of fleeting fame are being highlighted in the new festive advert from Scotland’s favourite whisky. 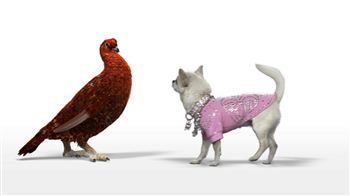 The cheeky little star of the Famous Grouse adverts has found a furry friend in this winter’s television offering.

But as this sneak-peak shows, the classy grouse pokes fun at reality TV-style fame by shunning a Z-list celebrity dog.

Whisky bosses say the ad shows that their tipple has “a real reason to be famous.”

The ad – named ‘Famous for a Reason’ – will air for the first time next Monday and is expected to cause quite a stir among the brand’s many fans.

In a nod to the 15 minutes of fame perpetrated by reality television, a pampered Chihuahua covered in diamonds struts across the screen, complete with paparazzi in tow.

But when the grouse encounters the pooch, he dismisses it with a disapproving shake of the head before taking up position in his usual stance on top of a rock.

The director of the company, Gerry O’Donnell, said that they always get a good response to their television adverts.

He said: “The advert is a light hearted take on the current obsession with fame and what it means to be famous.

“Having been Scotland’s number one selling whisky since 1980 we believe The Famous Grouse has good reason to be called Famous.

“Every year we are inundated with emails and letters about our TV ads. So we hope our fans will enjoy this new TV ad as much as all the others.”

But fans of the older grouse adverts will also be catered for this year as the best of the bunch is aired alongside the new film.

They will include ‘Perfectly Composed’ where the bird battles against a raging storm, managing to remain on his iconic rock.

The new advert will be aired on Monday November 23 during Midsomer Murders on ITV1.