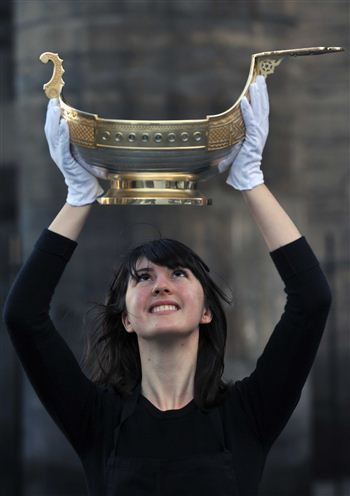 THEY were symbols of thanks for preventing two countries from going to war over a drunken misunderstanding.

And now the silver punch bowl, cup and salver given to the American admiral who saved the day are going under the hammer in Edinburgh.

Russia and Britain almost went to war in 1904 over the Dogger Bank incident, where a nervous Russian fleet opened fire on British fishing vessels in the North Sea.

But the Americans stepped in and negotiated a truce between the two nations, who were so grateful that they sent gifts.

With a combined estimation of £150,000, the items are expected to cause a stir when they go up for auction next month.

It was on October 21 1904 that a Russian fleet set sail for Japan where the Russo-Japanese war was in its tenth month.

When they reached Dogger Bank – a large sandbank 100 miles of the coast of England in the North Sea – they were tense and on the lookout for Japanese torpedo boats that they thought were in the area.

The drunk captain of the Kamtchatka supply ship mistook a Swedish fishing vessel for one of the enemies boats and sent out a signal to say he was under attack.

And later that evening when thirty British fishing trawlers were spotted by the Russians they opened fire, believing they would be attacked themselves.

Several fishermen died, many more were wounded and The Crane was sunk.

But losses would have been worse if the Russians were firing straight – one of the fleet even fired at their own ships.

The incident caused outrage in Britain, with the press branding the Russians pirates. The Royal Navy was mobilised whilst Russia promised to look into the incident and punish those responsible.

With the situation escalating out of the control, the Americans stepped in to try and resolve things diplomatically.

Rear Admiral Charles Henry Davis Jr. led the talks and by February 1905 had brokered a deal that both sides were happy with.

The fishermen involved received £66,000 compensation from Russia and a memorial was unveiled in Hull the following year.

Both countries sent Davis gifts to thank him for his work.

The Russians punch bowl is styled as a Viking longship on an oval base, with twelve matching cups that sit around the base.

And the British gifted a tall cup and salver decorated with pre-raphealite ladies and dolphins.

Both items are up for sale at Lyon and Turnbull on December 1.