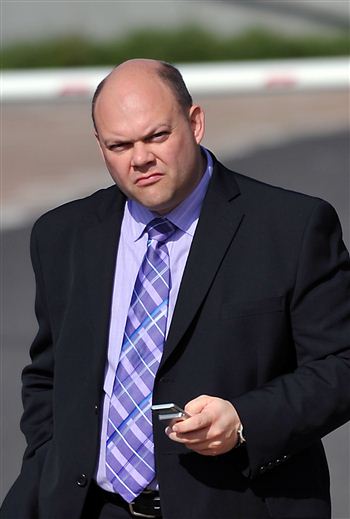 A POLICE pipe band tutor has been cleared of assaulting a teenage girl on the group’s coach as they made their way home from a music competition – despite touching her breast.

Iain McAlister had been accused of assault after allegedly quizzing the 18-year-old girl about her nipples before unbuttoning her top and “tugging” at her boob.

The 39-year-old had previously admitted during evidence that he had made seedy jokes about her breasts and that he may have touched her “by accident”.

But at Livingston Sheriff Court yesterday (Wednesday) Sheriff Martin Edington branded the incident an “indecent ” – but was satisfied no actual crime had been committed.

He said: “It is indecent – there was contact between your hand and her breast.

“But it was not assault.

“I therefore find you not guilty.”

Sheriff Edington said that the trial’s first witness was credible, but that parts of her story – including which breast he touched – were unreliable.

He added: “The second witness was very reluctant and it was like pulling teeth.

“But he was honest and reliable and said that you did touch her breast deliberately.

“You were also a credible and reliable witness.”

McAlister – a bass drummer in the Lothian and Borders Police Pipe Band – was suspended by the group following the alleged incident.

Outside court, McAlister, from Bathgate, said he was “relieved” the trial was finally over.

McAlister’s solicitor, Iain Smith, said the incident was part of the “horse play” on the bus.

He said: “Mr McAlister said he may have touched her breast.

“His evidence is clear and simple – he had been drinking and intervened mid conversation about her breast.

“It was rude and smutty and he joined in and as he was about to leave he made a gesture to pretend to touch her breast.

“He may have touched it and if he did he didn’t intend to touch it.

“His behaviour was not gentlemanly but certainly not criminal.

“He touched her breast and that’s not allowed.

“It was not a deliberate act but part of the horse play which was going on.”

During the three day trial, it was claimed McAlister unfastened the girl’s clothing and placed his hand on her breast during a coach journey from the Scottish Pipe Band Championships on May 16 last year.

The girl also stated that McAlister had asked her if her nipples were pink or brown.

But he contested: “I did not mention the colour of her nipples.

The court heard previously that McAlister had drank three cans of lager, a pint and “three quarters” of a second one during the course of the competition, but had said that he was “more sober than drunk”.

He said he began cracking jokes after seeing the girl talking with two others in the band.

And he said that the smutty innuendo was commonplace in the band, adding that “everyone was fair game”.

He said: “She had a blouse on which was very low and a vest top on underneath it.

But he insisted he did not mean to upset the teenager and was not sexually excited by the incident.