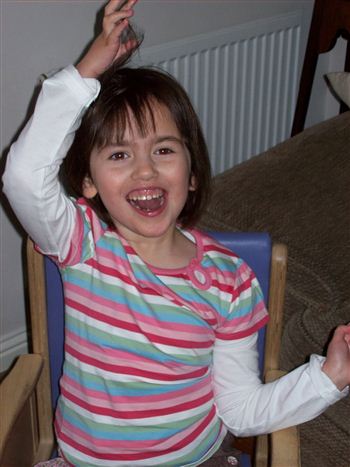 A BRAVE Scots school girl who has suffered from epilepsy since she was just weeks old has beaten off competition to win the trip of a lifetime to Disneyland Paris.

Little Millie Mackenzie, six, was declared the winner of a nationwide competition set up by Cineworld in connection with Disney Pixar’s latest animated picture, “Up”.

Millie, who lives in Dunfermline, Fife, has had eight operations since January including life-changing surgery which meant a quarter of her brain was removed to stop her 20-plus daily seizures.

And now she will join her family to holiday in the destination where “dreams come true” – hopefully before Christmas.

She said: “It doesn’t mean anything to Millie right now but it will when we get there.

“She’s really starting to pay attention to things and really loves Mickey Mouse and Winnie the Pooh, so she’ll go crazy when we get there.

“Her operation in January was the biggest thing that has ever happened to us as a family and she had an absolutely horrific seven months.

“But things have totally turned around now.

“She’s been totally off medication since the start of November – for the first time in her life – which is something we never thought we would see, and this is just a wonderful way to end the year.”

The competition challenged entrants to attach virtual balloons to their ‘house’ on the cinema chain’s website and thanks to overwhelming support, Millie racked up more than 184,000 hits.

Millie, a Calaiswood Primary School pupil, was nominated by a family friend and from there a Facebook page collected more than 1400 followers and a YouTube video was created to help raise her profile.

Kelly, 39, added: “The power of the internet is fantastic. There are so many kind people out there. They’ve never even met Millie and only heard of her and they took the time to do this for her.

“The YouTube video reduced me to tears. I just felt so humbled when I saw what they had done.”

Kelly and her husband Mark, hope their elder 18-year-old daughter Robyn can come too as the prize is for two adults and two children under 16.

She said: “Robyn’s been through it all with us and she ran the house when we were in hospital with Millie.

“This is for us as a family and I’d love to Robyn to see Millie’s face light up when she gets to Disneyland.

“We’re hoping we can just pay the difference but if we can’t we’ll just pay for her to go.

“Millie will have more tests at the Great Ormond Street Hospital in January and it’ll be wonderful to tell her surgeon we’ve been to Disneyland – he’ll be so pleased to see how she’s come along.”