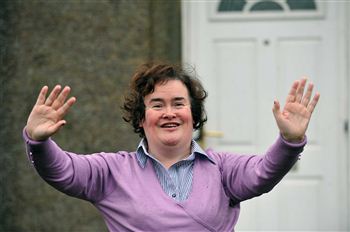 WAR HAS broken out in Susan Boyle’s hometown of Blackburn as one resident prepares to sell a unique piece of SuBo memorabilia.

The Britain’s Got Talent star won the local karaoke competition three times before her meteoric rise to fame and there are now plans to sell the trophy for charity.

But organisers’ of the town’s gala day claim they own the statue and say they’ll call in the police if Peter Mulholland goes through with the sale.

Susan’s brother, John, gave the MacRae Memorial Trophy to Peter at the Blackburn Bowling Club after she won the contest at the club in 2008.

“Digging my heels in”

Peter is refusing to budge saying: “There is a huge uproar about me trying to sell this but I have had it for a while and no-one batted an eyelid.

“If people came to me and asked for some cash to go towards the gala day or whatever, then I would have been glad to give them some of the money from the sale of the trophy.

“But these folk have got my back up now and they can forget it. I am digging my heels in.

“That trophy was given to me to sell and that’s what I’ll do. All the cash will go to charity.

“I have a certificate of authenticity for the trophy signed by Susan and her brother John Boyle. John gave me the trophy to sell for charity.

“If this is going to cause a lot of hassle to Susan, I would give the trophy back to her. But there is no way I am now going to hand it over to this other lot who are just being selfish.

“John gave it to me and me alone – it’s up to me what I do with it. If I get £10,000 for it, I would give half to children’s charity CHAS this year and half to charity next year.

“No-one was interested in it before but they’re coming out the woodwork now. I am well-known around here for raising money for charity, so this is nothing out of the ordinary.

“If it comes to it, I won’t give in and will just have to get lawyers involved.”

The trophy is named after a local man who used to run the gala day committee.

The karaoke competition is held every year at the bowling club as part of the gala day celebrations.

The organisers bought a new one in June but say they want Susan’s back because it should be returned after a year.

Current gala day organisers Joe Stronach, 65, said: “The trophy has been stolen basically. It is not his to sell and never has been.

“The trophy was only given out to previous winners for a year at a time. When Susan handed the trophy back, it has not been handed back to the right person.

“Any money raised rightly belongs to the Blackburn Gala Day. We have been trying to get it back for a while and it’s getting to the stage where we will have to get the police involved.

“If it’s going to be sold, it should be at a specialist auction.”

A family member said: “Susan’s done a lot for charity and she has endorsed the eBay sale of the trophy she won last year at Blackburn Bowling Club.

“The money is going to raise cash for the CHAS appeal which is close to Susan’s heart.”