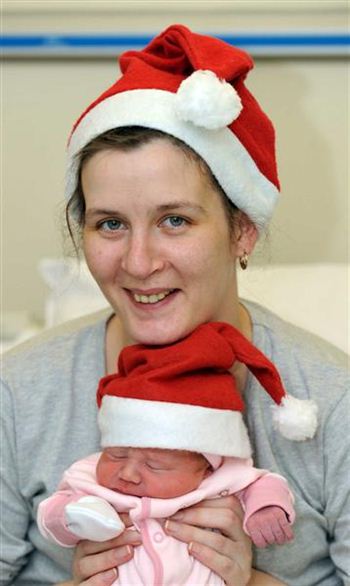 After Sophie beat Santa down the chimney at 4.41am, her brother Owen, eight, decided he wasn’t opening any presents until his mum came home with his new baby sister.

Alison, 29. of Dalkeith said: “It’s so cute that Owen wants to see me and his new sister before he opens his presents.

“A wee sister is the perfect present and one he’ll look after.”

The extra-special Christmas Day delivery tipped the scales at 6Ibs and 8oz when she was born at the Simpson Maternity Unit at Edinburgh’s Royal Infirmary.

Mum Alison said Christmas was an “ideal” time to give birth, as it meant she could pass on all the festive shopping duties to boyfriend Paul, 27, who works in the Macsween haggis factory in Midlothian.

Up in the air

She normally works in a busy Princes Street sports shop, but her “perfectly timed” pregnancy meant Paul did all the work.

Proudly cradling her newborn daughter yesterday (Friday), Alison said: “Paul is at home just now with Owen. We had so much planned but it’s all up in the air thanks to this little one.

“We planned to make Christmas breakfast for 12 relatives but apart from that she’s been perfectly timed.

“She just decided Christmas would be her day. I think she’s lovely, very peaceful.

“It’s been ideal getting Paul to do all the shopping while I’ve been pregnant; a lot less stressful than normal.”

But Sophie’s brother Owen had to wait one sleep longer than usual to get his presents, as mother and daughter weren’t expect home until later today (Saturday).

Sophie had slight breathing difficulties in the moments after she was born, so Alison was advised to stay in the maternity ward overnight.

The delighted couple, who have been together for 10 years, say they will treat Boxing Day like Christmas, in the knowledge December 25 will always be Sophie’s day.

Alison added: “She’s my pride and joy and just because it’s Christmas doesn’t mean she doesn’t deserve all the love and attention she would get if her birthday was another date.

“I would really like to thank the staff at the maternity unit for making my birth so smooth and relatively quick.”